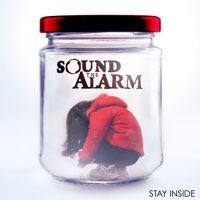 Album Review
Sound the Alarm
Label: Geffen Records
Reviewed by ChrisK
"Stay Inside", the debut CD from Pennsylvania's Sound The Alarm (STA) consists of twelve diverse tracks, a fact the band credits to being raised on an older brother's record collection. Factor in healthy doses of Aerosmith and Led Zeppelin with a steady diet of modern rock bands including Foo Fighters, Incubus and Stone Temple Pilots, and the band's infectious sound dilates into focus.

The result is an album that's as unique as it is engaging. Equal parts melodic and driving, the opener "Closer" sets the album's tone early. The acoustic-tinged ballad "Telling Lies" shows that STA can harmonize with the best of their peers. "Fact Or Fiction" and "Picture Perfect" showcase the bands ability to walk the fine line between rock and pop sensibilities. The first single "Suffocating" is a unique amalgam of modern rock, pop and punk. The song is immediately memorable and accessible

Sound the Alarm consists of frontman Cody Jancovic, bassist Colin Ellis, guitarists Brian Chiusano, Joe Brule and drummer Rick Stephans who were still in high school when they were discovered by producer Howard Benson (My Chemical Romance, The All-American Rejects, Head Automatica, Fly Leaf) and recorded under his direction.

"Stay Inside", is an album that will quickly gain momentum once released July 17 for all those who like catchy, memorable, pop driven rock.