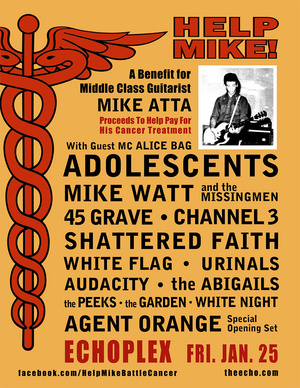 This Friday Jan. 25 @ The Echo will be a benefit show for Mike Atta (founding member of punk legends Middle Class) who has is battling cancer for a second time. There will also be a cool cassette you can purchase from Burger Records at the show to help even more.

The Adolescents, Mike Watt, Agent Orange, Shattered Faith, Channel 3, Urinals and more bands play a special benefit concert at the Echo and the Echoplex this Friday, January 25th! Alice Bag from The Bags will MC this special, one-time event.  All these bands pulled together and donated their performances for the sake of Mike Atta (founder member of legendary punk band Middle Class), who recently found out that he must battle cancer for a second time. Proceeds will go to the fundrazr "Help Mike Atta Battle Cancer" account: https://fundrazr.com/campaigns/6Otz6.

All proceeds from the one-time only pressing will also go to the Help Mike Atta Battle Cancer fund. It will be for sale at the concert and for sale on the Burger Records website on Saturday, January 26!