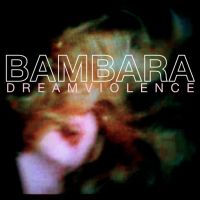 BAMBARA is a storm that recalls the brooding filth of early Swans and The Birthday Party, and the pummeling energy of Jesus Lizard or Iceage.

Although BAMBARA only formed in Athens, GA in late 2008, the three band members have grown up together. Twin brothers Reid and Blaze Bateh and childhood friend William Brookshire have been consistently making music and playing shows together since they were in the 7th grade.

DREAMVIOLENCE is BAMBARA’s long awaited full-length follow-up to their acclaimed debut EP Dog Ear Days (2010). After playing countless deafening shows in their hometown of Athens, touring the US in sweaty house shows and sharing bills with Grimes, Iceage, Liturgy, A Place to Bury Strangers, and Parts and Labor, BAMBARA decided to leave their beloved Athens and move to a basement apartment in Bushwick, Brooklyn for a change. Here they practiced, slept and recorded for the majority of 2012. Following the release of a Kate Bush cover and a 10 minute improv noise EP RINGS early in the year, BAMBARA began to work on DREAMVIOLENCE.

With a minimal recording set-up and little sunlight, the band was able to completely capture the dark, grimy, noisy sound they are known for while maintaining the lush beauty that glues it all together. Reid’s voice croons and snarls the fragmented images of the city. Blaze and William’s driving rhythm section plows and swings through the dirge of vocal noise with furious power. BAMBARA doesn’t want you to get comfortable in DREAMVIOLENCE. They prefer to send you through vortexes of haunting noise before you reach the dreamy euphoria waiting in the wreckage.

DREAMVIOLENCE  was released on the band’s own tape label Emerald Weapon Records that they use to put out their music, video projects and Reid’s solo noise project FEVERER. The album art features a still from the 1999 Leos Carax film POLA X.

TOUR WITH A PLACE TO BURY STRANGERS

ON TOUR WITH METZ