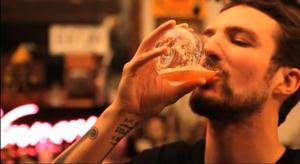 Frank Turner has created his brew to be a modern twist on the traditional wheat beer encompassing citrus and orange flavours to create a refreshing brew. Designed to accompany long sunny afternoons, this clear 4.8% Witbier (Belgian Style Wheat Beer) has a crispness that will refresh and subtleties to engage the palate.

Work began on the recipe back in March of this year with Frank joining the Signature Brew team in an extensive tasting session. Having travelled the world playing shows, Frank’s knowledge of European and world beers was drawn into sharp focus by Lead Beer Expert, Tom Bott. The burgeoning wheat beer range on the continent proved to be of most interest, with their crisp taste and easy drinking style.

Frank Turner has been one of our favourite artists from as far back as his KneeJerk and Million Dead days, so we jumped at the chance to be able to make a beer with him. Frank’s keen intellect and surety of opinion has borne through in this multifarious blend of the new and old in what is our first Wheat Beer. It has taken a long time for us to come to the final recipe; making sure that the final brew was perfect. We can’t wait for people to try it!

Frank Turner on the beer and his experience:
“Being asked to design a beer was a new one for me - I don't know masses about beer, other than that I like drinking it a whole lot. In the end I learned a lot, had a fun evening getting hammered, and ended up with a beer with my name on the label, which is pretty much the pinnacle of any road-dog's ambitions. I'm very much looking forward to sinking a few with friends after a show.”

Video: ‘Aces Up’ From MXPX