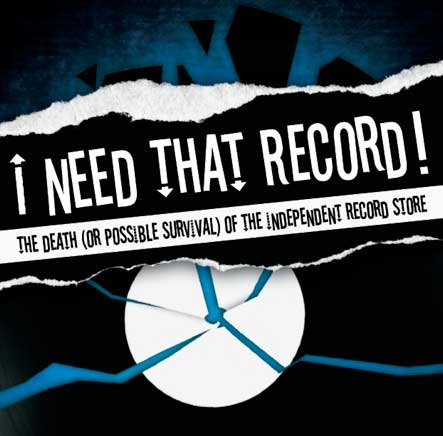 MVD Visual has announced the release of "I Need That Record! The Death (or Possible Survival) of the Independent Record Store" for North American distribution on April 17 (Record Store Day). It will be offered exclusively to independent record stores for a period of 90 days. Afterwards, it will be available everywhere on July 27.

Guerilla filmmaker Brendan Toller presents a documentary feature examining why over 3000 independent record stores have closed across the U.S. in the past decade.

Greedy record labels, media consolidation, homogenized radio, big box stores, Ecommerce, shoddy "stars" pushed by big money, and the digital revolution all pose threats on the very well being of our favorite record stores and the music industry at large. Will these stores die? Will they survive?

"This film has been a four year labor of love playing at over 25 film festivals worldwide (and continuing)," said Toller. "So when it came time to craft the DVD we packed it with 2+ hours of candid interview extras with: Thurston Moore, Mike Watt, Ian MacKaye, Lenny Kaye, Patterson Hood, Glenn Branca, Pat Carney, and Legs McNeil."