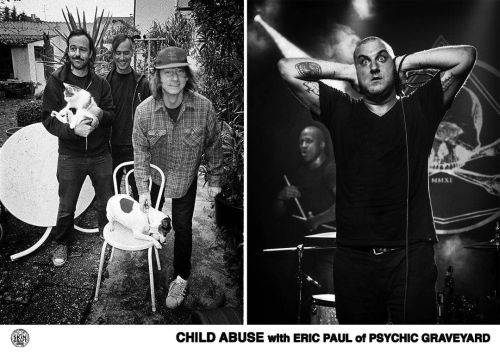 For decades New York City has been the origin of some pretty far-out sights and sounds in the rock, metal, noise, and jazz underground, and Child Abuse has been at the forefront of this type of boundary-pushing – and –breaking – music for over 15 years.

The band has teamed up with Eric Paul, the singer of the notable acts Psychic Graveyard, Arab On Radar, and Doomsday Student, on “Child Support.” Paul provides potent guest vocals on a pushily staccato track that winds up in intensity and pace before it goes off the rails.

Jags of sharp bass guitar, blurts of ragged keyboard notes, and a punchy drum beat strut along at the start, before fast cymbals crashes begin to elbow into the mix. The bass and keys burn turns abrasive and competes for space with the kinetic drum-kit rhythms.  Paul comes in at the midpoint, half-giggling and half-exclaiming, “Who’s gonna clean up this mess?”

Paul’s vocal tone gets increasingly unhinged, with the disorienting, but frenetically driven instrumentation going the same route. Like a teenage babysitter freaking out on weed, he exasperatedly asks, “When is your mother/father coming over?” amid a rumbling tumble of drum beats and woozily reeling bass lines.

Rebel Noise is also psyched to host the bonus premiere of “Wavy Gravy”, which also comes off of Imaginary Enemy. This track actually tops the trippy factor of “Child Support” with a go-for-broke blast of rapid-fire drumming, rubbery bass line gumption, screeching bass guitar skeins, menacing, echoed death metal growls, and munchkin-like tweaked vocals. Maybe this is what happens when psychedelia goes insane and meets its maker in Hell…?

Child Abuse recently toured both North and South America and Europe. The band have a matinee show at Saint Vitus Bar in Brooklyn on October 19th, with some of the proceeds going to a child abuse prevention organization. Details below: https://www.facebook.com/events/1378834785604770/