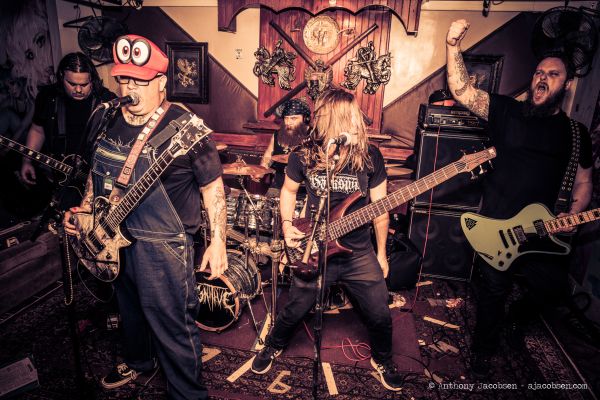 Folk-metal juggernaut Frost Giant comes up from the cold depths (of Philadelphia!) with a new, tuneful onslaught.

From the wintry climes of the Nordic tundra arises folk-metal slayers Frost Giant… No, hold on, the latest weather report says the musical juggernaut originates from of all places, Philadelphia!  Although, with the snowstorm that just blew in, Philly could sub for the Nordic landscape…

Frost Giant is a unique, entertaining, and blazing metal band that would melt the heart of even the iciest troll.  The act’s third album, The Harlot Star, will scorch the frozen earth with its mighty metal prowess January 19th via Transcending Records.  The LP is a catchy mix of ‘90s SoCal punk, European folk metal, and American hardcore rooted in Norse mythology, historical references, and general mayhem and silliness.

Rebel Noise is dead excited to premiere a rousing cut from The Harlot Star, the punishingly searing and speedily pummeling “Curse of Doubt.”  Epic metal, hardcore attitude, and punk(-pop) energy run amok on this infernally enjoyable killer number with blistering guest vocals from Bob Meadows of A Life Once Lost.

And get knocked dead by the gorily bloody (and bloody wild) clay animation video for recent single “Prisoner of the Past” directed by Brewce Longo: