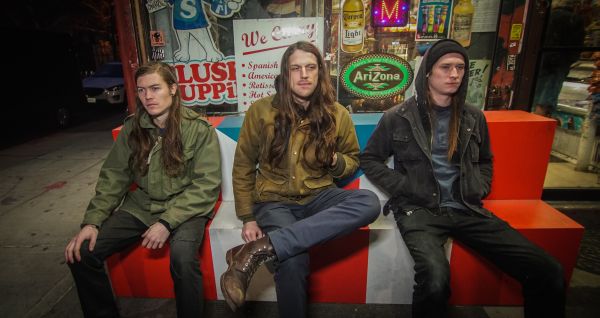 Brooklyn-based power rock trio Grandpa Jack is no stranger to heavy riffs and otherworldly soundscapes that defy time and tempo. With primal grooves, fuzzed-out guitars, and a thundering low end, Grandpa Jack’s self-titled debut record is a heavy take on psychedelic rock that explores the darker reaches of the soul.

Johnny Strom (guitar, vocals), Jared Schapker (bass), and Matt C. White (drums) tracked and mixed the record with Matt Labozza of studio G then teamed up with mastering wizard Brad Boatright of Audiosiege (Sleep, Yob, Corrosion of Conformity) to transform each track into a hard-hitting sonic exploration of the mind.

Gearing up for the full album release, Grandpa Jack unleashes their first single “Mariana”, a potent, psych-tinged number which Rebel Noise premieres here. It sets the tone and vibe of the sounds to come. On writing the track, bassist Jared Schapker says: “The music came first. We sort of created this huge, slow-lurching, riff-heavy song and the lyrics that came later totally reflect that.” Drummer and vocalist Matt C. White adds “It’s about exploring the deep dark fears and thoughts that we all share and are a part of human nature. This is described metaphorically through the concept of drowning in your own thoughts and succumbing to the depths of your own mind.”

"Mariana" is available now on standard streaming platforms. Pre-sale for the album will start on July 13th and the full album will be available on August 10th.

Video Premiere: “What You Want Us To Be” by The Bongo Club

Kickstarter campaign for Ska in the ‘90s documentary