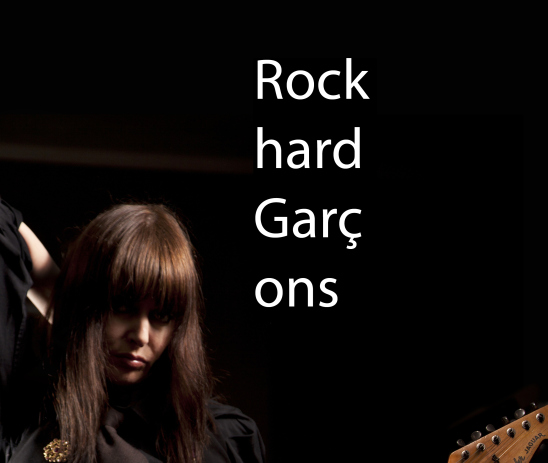 Avy’s (ex-Sharkboy) new indie rock band Rockhard Garçons and The Rock And Roll Wall Of Death team up for a split 7”.

Yes, somebody is putting out a record. Contain your excitement. This is a good one, though. It’s a split single (7” vinyl/download). The tracks are:

Rockhard Garçons: “You Always My Hero”

The Rock and Roll Wall of Death: “The Garden”

Rockhard Garçons:
Is Avy, the leader, voice and former songwriter of Sharkboy, creator of two beautifully textured and cultishly cherished albums for Nude records in the Nineties. She broke up the band, then married (sorry boys), kept writing, kept playing and started recording again eighteen months ago. The best of fifteen years worth of songs are now resurfacing. “You Always My Hero” is the first. If you think it has an eerie, chiming, looping quality only accentuated by its scrawls of guitar, well, that’s your call.

The Rock And Roll Wall Of Death:
A band gathered around Marc Johnson, musically a perfectionist and a recluse. A man who has abandoned half a dozen different sounds he’d worked on for years because they became fashionable before he was satisfied with what he’d done. These endure now only in the memory of those lucky enough to have caught scarce live performances. “The Garden”, with its dreamlike sense of light glimpsed through mist, is a rarity: an of-the-moment snapshot of his work, which will otherwise have to be compiled on a 100-disc box set in due course.

AND THE BAND NAMES?

“Rockhard” is a play on the French word for “shark”, “requin”.

The Rock And Roll Wall Of Death is in no way intended to be ironic. It’s what Mark thinks a band should sound like.

Full Album promo from indie rock trio You Are Plural