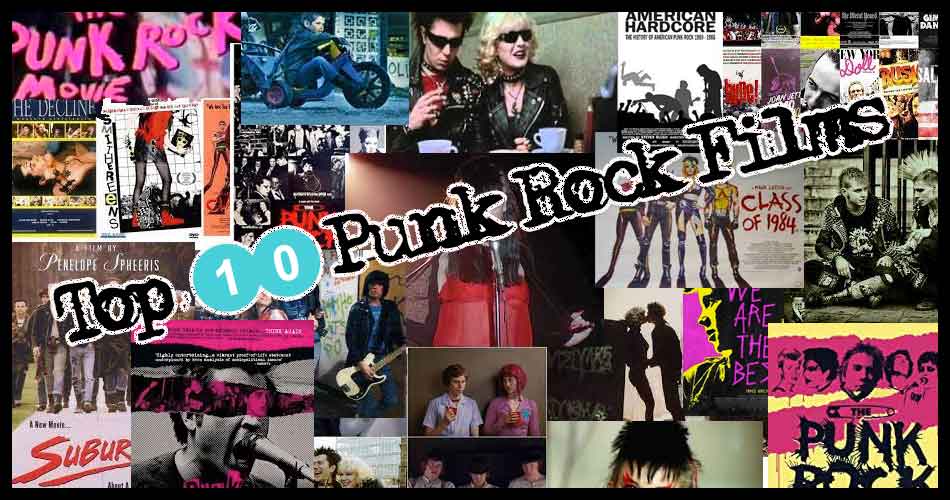 We enlisted the help of family & friends of Rebel Noise to compile an all-time list of the "Top 10 Punk Films". As with any top 10 list, the order and choices are up for debate. The following movies made the cut and the top film shouldn't be a surprise - or will it? You decide. Let the debate begin and tell us what's missing or how you would order the list. It's a shame, "SLC Punk" deserves to be on this list! At any rate, if you haven't seen any of these films, take note and queue them up on Netflix - in no particular order of course. -Dodge

The staggering story of the group that wrung the neck of rock 'n roll.

Synopsis: A rather incoherent post-breakup Sex Pistols "documentary", told from the point of view of Pistols manager Malcolm McLaren, whose (arguable) position is that the Sex Pistols in particular and punk rock in general were an elaborate scam perpetrated by him in order to make "a million pounds." Silly and hard to follow at times, but worth seeing for some excellent Pistols concert footage, some wickedly amusing animated sequences, and Sid Vicious' eerily prophetic performance of "My Way."

These girls created themselves

Synopsis: Corrine Burns retreats far into plans for her band, The Fabulous Stains, after her mother's death. So far that she gets them on a tour with a washed-up glam-rock group called the Metal Corpses which is fronted by Fee Waybill of The Tubes and a rising British punk band called The Looters comprised of Paul Simonon from The Clash and Paul Cook & Steve Jones from the Sex Pistols. After making some radical changes to her appearance she attracts a cult following and national media attention. With luck like this, what could go wrong?

Synopsis: Vince Lombardi High School keeps losing principals to nervous breakdowns because of the students' love of rock 'n' roll and their disregard of education. The putative leader of the students is Riff Randell, who loves the music of the Ramones. A new principal, the rock-music-hating Miss Evelyn Togar, is brought in and promises to put an end to the music craze. When Miss Togar and a group of parents attempt to burn a pile of rock records, the students take over the high school, joined by the Ramones, who are made honorary students. When the police are summoned and demand that the students evacuate the building, they do so, which leads to an explosive finale.

Synopsis: The story of Sid Vicious, bassist with British punk group the Sex Pistols, and his girlfriend Nancy Spungen. When the Sex Pistols break up after their fateful US tour, Vicious attempts a solo career while in the grip of heroin addiction. One morning, Nancy is found stabbed to death and Sid is arrested for her murder.

Run with the crowd, stand alone, you decide.

Synopsis: A story about a troubled boy growing up in England, set in 1983. He comes across a few skinheads on his way home from school, after a fight. They become his new best friends even like family. Based on experiences of director Shane Meadows.

Synopsis: Bruce Macdonald follows punk bank Hard Core Logo on a harrowing last-gasp reunion tour throughout Western Canada. As magnetic lead-singer Joe Dick holds the whole magilla together through sheer force of will, all the tensions and pitfalls of life on the road come bubbling to the surface.

Under the makeup. Over the edge. An incredible journey through the underground.

An American punk rock documentary filmed though 1979 and 1980.

Featuring concert footage of legendary Los Angeles punk bands, and interviews both with band members, the publishers of Slash (fanzine), and with the punks who made up their audience, the film offers a look into a subculture that was largely ignored by the rock music press of the time. Bands included are Black Flag, The Germs, X, The Bags, Circle Jerks, Catholic Discipline, and Fear.

Rebel Streets, The Wild Side… Suburbia

Synopsis: A film about suburban punks who run away from home and take up a minimalist, punk lifestyle by squatting in abandoned suburban tract homes. Directed by Penelope Spheeris of "Decline of Western Civilization' who recruited street kids and punk rock musicians to play each role, rather than hire young actors to portray punk rockers. The punks are played by Chris Pedersen, Bill Coyne and Red Hot Chili Peppers' bassist Flea, amongst others.

The movie contains live footage of D.I. performing "Richard Hung Himself", TSOL performing "Wash Away" and "Darker My Love," and The Vandals performing "The Legend of Pat Brown".

Synopsis: Now-classic punk fable of Otto, the newly hired repo man. This off beat film has a little of everything: action, comedy, urban decay, police drama, mystery, governmental conspiracy and even UFO's. The story centers on Otto's search for a mysterious Chevy Malibu carrying mysterious cargo in the trunk.