Punk. Thrash. Hardcore. Take a look into the world of punk on the streets and venues of Seattle. One band in particular, The Insurgence, never lets their audience forget that they do have a message. With a line-up consisting of Jibo on vocals, Mike Time Bomb shredding on the guitar, Josh Sinder beating the skins senseless, Justin brutalizing the bass, and Del driving it all home on his guitar. Influenced by world issues not just governmental politics, a cliche and overused subject in the world of punk philosophies, The Insurgence take being pissed off about unjust bulls**t in the world and turn it into a musical outlet where they can possibly educate and motivate others. It’s about the big guy stepping on the little guy which you quickly discover listening to their songs about Darfur and even such topics as honor killings and wars for religion. Such truths might not be easy to stomach, but they are a glaring reality, and The Insurgence do not retreat from or avoid anything controversial or uncomfortable, just to avoid offending people. As the music scene grows and trends trundle in and out, punk rock is always going to be there. And with the advent of the Internet as a promotion tool, the band uses this prime example of the new D.I.Y. to reach out directly to their fans: the catalyst for the appeal of the underground music scene all along. 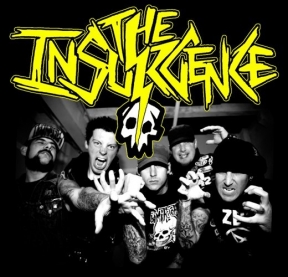