Leaving the Ways: An Interview With The Briggs 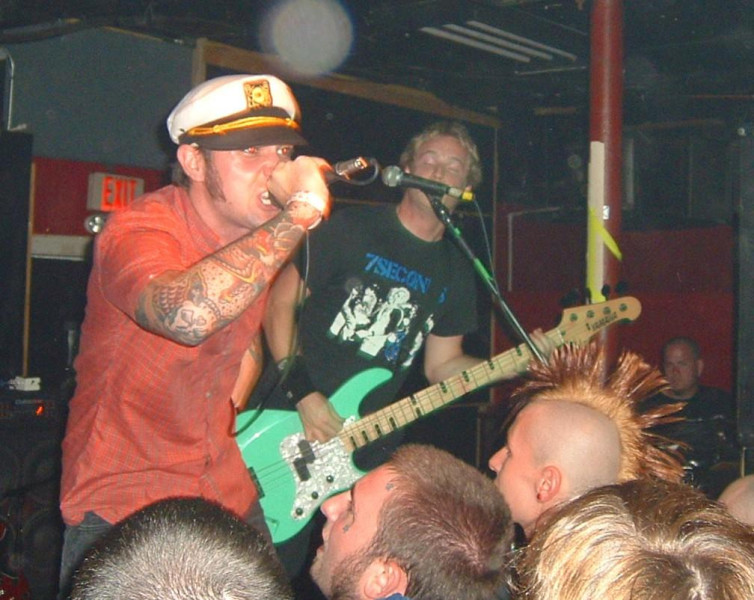 The Briggs have more diversity than simply pounding out anthem after anthem, as evidenced on the super-fast, undeniably hardcore and angry “All on Me” (one of the record’s best offerings), the street-tough “Song for Us” that beckons one to sing along, and the unexpected finale “Top 40”, a song that oscillates between cool, mellow, bass-heavy reggae beats and straight-up hyper punk. Joey discloses a composition such as this last one is a result of the guys having interest in many different types of styles and bands.

The Briggs’ latest record, the six-song energetic punk fest ‘Leaving the Ways’ (the guys’ first on SideOneDummy), was actually produced by Mighty Mighty Bosstones’ bassist and frontman of Avoid One Thing, Joe Gittleman, who also took over bass duties on the recording, as the band had not yet found a new bassist. The problem of a full-time bassist, by the way, has now been rectified with the addition of a man only refered to as Charlie by vocalist Joey LaRocca, who promises the rest of the guys in the band – guitarist Jason LaRocca and drummer Chris X – are “showing him the ropes,” while also, and inevitably, “putting him through hell.” Charlie’s a lucky character, as he is thrust into the national spotlight, heading off with The Briggs for the second half of the Warped Tour, toward which they were driving during our conversation (Joey was calling from Oklahoma City on their way to Chicago).

In any case, I wondered whether The Briggs procured Gittleman since his bands have both put out records on SideOneDummy, but as Joey explained, this is not the case. Rather, he says, they met Gittleman while both they and his band MMB were on Warped Tour in 2002, after which The Briggs played a show in Boston with labelmates Street Dogs and Joe just happened to catch the show. “He took us out for lunch the next day,” the singer relates. “We were just hanging out and talking and we were just off-hand discussing our next record coming out on SideOne… It wasn’t really decided right then [that Joe would work with us], it was just kinda talk, but when it rolled around,” he concludes, “it just ended up falling into place and working out.” And the rest, as they say, is history. The band went out to Boston and recorded with Gittleman, in turn creating quite a tight, punchy, spirited EP full of crisp anthems replete with gang-vocal choruses, stomping beats, and catchy riffs, best exemplified in songs like “Waiting in the Shadows” with those powerful closing “oh” chants, and “Dungeon Walls” that bring to mind the great British Oi! bands of the late-‘70s/early-‘80s.

Yet, The Briggs have more diversity than simply pounding out anthem after anthem, as evidenced on the super-fast, undeniably hardcore and angry “All on Me” (one of the record’s best offerings), the street-tough “Song for Us” that beckons one to sing along, and the unexpected finale “Top 40”, a song that oscillates between cool, mellow, bass-heavy reggae beats and straight-up hyper punk. Joey discloses a composition such as this last one is a result of the guys having interest in many different types of styles and bands. “We like to show as many of those sides [as possible],” says Joey. “That’s just one of the many facets of the band.” Of “Top 40”, he explains, “We’re all big fans of reggae and The Clash…so it just kinda has that feel to it, and lyrically, it’s just a you know, kind of annoyed at the present-day pop scene, basically, which is obviously clichéd, but,” he defends, “it’s something that annoys the hell out of me, so I had to write a song about it.”

The vocalist describes differences in ‘Leaving the Ways’ from previous albums ‘Is This What You Believe?” and ‘Numbers’, as a product of “constant evolution.” In greater detail, he expounds that as in any band, it’s “constant evolution of what’s really you, what’s really your sound and your style. It’s not even really intentional; it’s something that just kinda happens gradually with each release.” And just the title of the record reflects this idea. Turns out “leaving the ways” is a nautical term used “when a ship sets sail and is released from the ways [the stilts the ship sits atop while being built and before taking off],” Joey explains. It’s a metaphor for where the band is at now. “It’s kinda like we’re setting sail on a new horizon.”

The Briggs have been playing some of their new songs off the record live and have been getting some good reception from audiences, which bodes well for their Warped Tour dates and their record, which came out a couple days ago, July 27. So, basically, touring-wise, the guys will be with the Warped Tour until its conclusion in Boston, August 19 and then will be heading off with Flogging Molly and Street Dogs on the first annual SideOneDummy Tour kicking off September 14 and lasting until October 23. Check the label’s site, www.sideonedummy.com, for details.

Because of all their touring (they believe a European jaunt with Flogging Molly might happen at the end of the year), a new full-length is not probable until next year. About writing material for that endeavor, Joey reasons after that tour concludes (perhaps in December), “we’ll probably start working on it then ‘cause I think we’ll all be ready for a little bit of a break from the road and have time to sit at home and write some music.”

The Briggs - ‘Leaving The Ways’