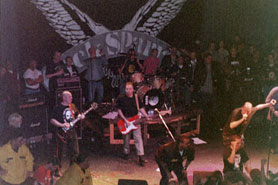 What a night for a historic event. It was pouring rain, the hall opened late, punks by the bus load (literally, 45 Revolution in LB rented a bus and packed it full of drunk punks) were standing outside in full regalia dripping wet from the oncoming storm. All were waiting for the US debut of England's godfathers of Oi!, Cocksparrer. First to hit the stage were Long Beach's Scarred For Life. Now these guys belt out some brutal hardcore with a hint of Metallica type riffing to keep the whole thing sounding fierce and deafening. These guys really put 100% into their sonic assault. Unfortunately the majority of the crowd was still waiting in line out in the rain to get in. Next to hit the stage were Pasadena's own Generators. Now these guys feature a couple of the guys from Schleprock, but their sound is a bit different, not much but it is different in it's own unique way. Now Doug and crew belt out straight up Streetpunk/Oi!/Rock n' Roll. Doug really knows how to get the crowd going and eggs them on the whole way. By far one of the most outstanding performances of the evening, the Generators are machine to be reckoned with. Keep an eye for these guys, I predict they will be the next big thing out of LA.

Orange County bootboys the Authority were next to pummel the crowd with their own brand of breakneck bare fisted punk. Now the line up, with the exception of Billy, seemed completely different from the CD line up. But the flavor was all intact. Billy encouraged the audience to sing along while keeping the pit at a frenzied level of youthful aggression. I don't know why these guys do not play OC/LA more often, they have the goods to keep the show at extreme levels. Following the Authority came squeaky clean punk rockers Mad Parade mixing both old and new material and providing a more theatrical approach to punk. For those not in the know, these San Gabriel Valley boys play late 70's/early 80's style of British Pop influenced Punk, in the vein of the Addicts and Toy Dolls. Following them were South OC's Stitches playing their brand of late 70's American punk. I was too busy drinking beers with Cocksparrer and the Generators to catch their whole set. Every man has got to have his priorities.

And now for the moment we were all waiting for this evening… Cock Sparrer! Now these guys have been making music since the mid 70's and are responsible for practically starting the Oi! Movement worldwide. The crowd was in a mad frenzy when these old blokes hit the stage. Yeah, they may have looked very aged for a punk band, but these old timers played like they were teenage hooligans all hopped up on some good stout ale. The crowd was mesmerized as they tore through classics like "Bird Trouble", "Tough Guys" and "Argy Bargy". In fact these wildmen Brits had the whole hall singing as they belted out Cock Sparrer hits like "Runnin' Riot" and "Run Away Johnny". The climax of the evening was when the Cock Sparrer had all these southern california kids singing word for word "England Belongs to Me", the would be Cock Sparrer working class anthem. Poised for imfamy, Cock Sparrer proved that age was nothing but a number, out doing all bands that came before them this evening. This was a show of monumental proportions and hopefully a sign that these Icons of Oi! will be returning to woo the masses in the not so distant future. For all you lunk heads who missed this show because it was a Sunday night, well your loss is our gain. Cheers! Oi!

The Dwarves @ The Troubadour