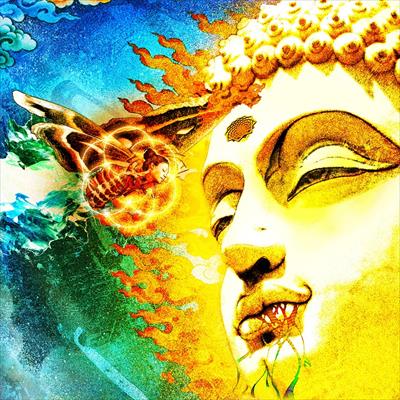 'On Her Journey to the Sun' cover 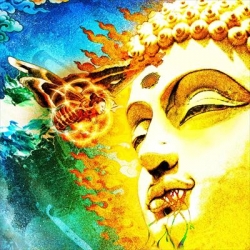 The former Beardfish frontman has crafted another exuberantly imaginative, memorable, and sophisticated record with On Her Journey to the Sun.

With the official disbandment of Swedish quartet Beardfish last July, the progressive rock world lost one of its most beloved acts. Formed circa 2001 and led by singer/songwriter/guitarist/keyboardist Rikard Sjöblom, the group’s characteristically complex quirkiness (both in terms of songwriting and instrumentation) yielded some of the greatest sequences the style has ever had. Naturally, fans feared that no matter where the members went as individual players in the future, they’d never again produce music that captured that special Beardfish essence.

Fortunately, Sjöblom’s latest release (under his familiar Gungfly moniker, under which he released two prior LPs: 2009’s Please Be Quiet and 2011’s Lamentations), On Her Journey to the Sun, proves that theory wrong. Sure, it’s different enough to warrant its own identity and judgement, but like the solo efforts of genre icons Neal Morse and Steven Wilson (as well as his own 2016 gem, The Unbendable Sleep), On Her Journey to the Sun demonstrates that no matter how he classifies it, Sjöblom’s idiosyncratic charms will always shine through. At once familiar and different, it’s another example of why he’s such a unique, reliable, and treasured artist.

In the full-length’s official press release, Sjöblom explains the project as follows:

Gungfly was born out of necessity; songs came to life whenever there was downtime with Beardfish or if a song didn't quite fit within Beardfish’s . . . frame of styles. I basically started recording songs, mainly pop-oriented material, but being the type of songwriter and musician I am, some prog slipped through under the radar as well. With the break-up of Beardfish, all of the prog-related material I write needed to go somewhere and Gungfly was ready and able for this step!

Joining him on the album are several of his “oldest friends”: ex-Beardfish guitarist David Zackrisson, as well as brothers Petter and Rasmus Diamant (drums and bass, respectively) and keyboardists Sverker Magnusson and Martin Borgh. In fact, Sjöblom calls the Diamant duo “the backbone foundation” of Gungfly, adding that they sometimes “actually do gigs as the Gungfly trio.” Likewise, he and the other two keyboardists occasionally appear on stage at the same time. While On Her Journey to the Sun is a wonderful collection in and of itself, the fact that Sjöblom created it in the midst of other projects (namely, the latest Big Big Train opus, Grimspound) makes it even more remarkable.

“Of the Orb” kicks things off with a trademark spoken excerpt and blend of mournful vocals and acoustic guitar arpeggios. Considering how much his guitarwork resembles that of Steve Hackett here—plus the line “Make way for the night / for the cinema show”—it’s a safe bet that this initial passage is an homage to classic Genesis. Soon synths swirl around his branded sorrowful storytelling and instigate a gorgeous and full-bodied arrangement as the chorus—“Stay with me / Care for me / I will be yours”—coats the scene. From there, trickier yet immensely inviting jams (including a very Beardfish-esque zany tangent halfway through) and divergent vocal units intercept this core, ensuring that the track flows with the kind of beautiful hypnosis only Sjöblom can provide. Truthfully, with its inescapably moving melodies and lyrics, enticing backing harmonies, pleasant timbres, “Of the Orb” ranks alongside the best tracks he’s ever cut.

The title track is generally breezier and more accessible; it’s still catchy and dense but not especially intricate, allowing its central romantic fable to seize center stage. Also, Sjöblom hits some impressively high notes and dishes out a killer guitar solo near the end. “He Held an Axe” is similarly warm and engrossing but with a sparser and moodier vibe, complete with more lovely acoustic guitar arpeggios and subtle keyboard and percussion embellishments. It features some of the tightest harmonies of any Sjöblom song, too, so that’s a clear highlight. In contrast, “My Hero” is a feisty beast bursting with his signature interlocking instrumental patterns and eccentric rhythms. Of particular note is the duality of flamboyant six-string and bass lines, as well as the seamless and vibrant blend of in-your-face assaults and tranquil transitions. (He also unleashes some fierce wails along the way.) Next, “If You Fall, Pt. I” is a gentle yet still multilayered ballad that finds the trio’s jazzy organ and piano skills standing out most.

Cleverly, the title “Polymixia” actually refers to a species of beardfish; musically, it’s a fervent and lengthy instrumental that recalls the boundless textural and technical grace of Destined Solitaire. Filled with endearing adventuress and quirky variations in the midst of overarching drama, it’ stands alongside just about every other comparable composition Sjöblom has produced. Afterward, “Over My Eyes” captures one of his best frameworks: haunting and patient odes decorated by a gripping fusion of strings, piano chords, and impassioned singing, whereas “Old Demons Die Hard” glides along bluesy guitarwork and antagonistic sentiments from a vilified and nostalgic ex-lover. On the other hand, “Keith” is a milder and brighter counterpart to “Polymixia,” while the penultimate “The River of Sadness” is the longest and arguably most striving entry here. Permeated by more robust harmonies, unusual timbres, and mesmerizing sectional shifts (that evoke European siblings like The Flower Kings, Kaipa, and The Tangent), it’s a friendly, tasteful, and ambitious way to [almost] end On Her Journey to the Sun. As for “…All a Dream,” it’s a brief atmospheric coda that continues the initial spoken word excerpt over dreamy keyboard notes and echoes. Ominous and tragic, it effectively concludes the voyage on a serenely dejected note.

Anyone who’s familiar with Sjöblom’s previous work should have a good idea of what to expect from On Her Journey to the Sun; in other words, it doesn’t push wildly fresh boundaries as much as it maintains everything that makes his artistry so singular and recognizable. There are moments here and there that mark a deviation from his Beardfish days, yes, but there are just as many instances that would fit directly inside them. In any case, he’s crafted another exuberantly imaginative, memorable, and sophisticated record that impresses with every passing moment. No matter how many times passes or under which name he creates, no one does it like Rikard Sjöblom.