Ben Harper Collaborates With Blues Legend Charlie Musselwhite On “Get Up!” 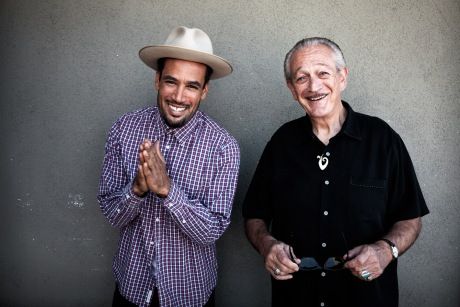 Ben Harper has teamed with renowned harmonica master Charlie Musselwhite to create Get Up!, a piercing song-cycle of struggle and heart, slated for release by Stax Records/Concord Music Group on January 29th, 2013. Recorded in Los Angeles and produced by Harper, Get Up!, is his 12th studio album and first new recording since 2011's Give Till It's Gone (Virgin).

"Charlie and I have been looking to make this record for over ten years and now that we've gotten to it," stated Harper, "I can't wait to play it live."

"Ben and I really locked in, personally and musically, when we recorded with John Lee Hooker," added Musselwhite. "Ever since then we wanted to record together and being in the studio together is just a natural. You can hear it and feel it in the music on Get Up!"

A striking mix of blues, gospel, roots and R&B, Get Up! features ten vivid musical character studies, skillfully rendered in cinematic detail, all written or co-written by Harper. The politics of personal destruction is palpable on the opening track "Don't Look Twice,": "I'm a living nervous habit/I tremble and I twitch/Keep on pulling at me/Like I'm some kind of hanging stitch." Likewise, a convict measures his prizefight with the truth as Harper growls in the title track: "Don't tell me I can't break the law/Cause the law has broken me." Finally, a ghostly soldier awaits his duty but laments the mind-numbing futility of war in the haunting battle hymn "I Ride At Dawn,": "Give a man a hundred years/He'll want a hundred more/Give him a hundred choices/And he still chooses war/From Salem poor to Genghis Kahn/Tomorrow I ride at dawn."

Charlie Musselwhite's searing point/counter-point harmonica accentuates Harper's vocals throughout Get Up!, tying its songs together into a cohesive musical whole. The band, including Jason Mozersky, guitar; Jesse Ingalls, bass; Jordan Richardson, drums; along with Ben Harper on vocals, guitar and slide guitar; plays with economical grit, lending the songs true understanding and authority.

In 1994, Ben Harper released his first record Welcome to the Cruel World, marking his arrival as singer and songwriter of substance and ambition. Two decades later, an artist in full creative command, he's delivered an inspired work of purity and depth. Get Up!, the new album from Ben Harper with Charlie Musselwhite, is sure to be one of 2013's most essential recordings.