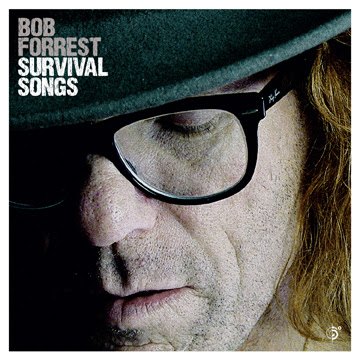 Forrest Best Known as Lead Vocalist of Thelonious Monster, The Bicycle Thief, and as a Drug Counselor on Celebrity Rehab is on tour now and will release album 10/9 via Six Degrees Records

Survival Songs just premiered at All Music, with Forrest saying "Survival Songs is my life laid bare.  Presented in the rawest most intimate way possible. Songs I've written throughout my life. Songs of my youth. Songs about right here right now. Songs about love and death. Songs I look back and see the younger version of me and my perception of the world then. Songs about where I'm at now. Songs. Songs. Songs. In the end, my kids and my songs are all I've got."

Survival Songs coincides with the paperback release of Forrest's memoir, Running With Monsters, which details his struggle with addiction in L.A.’s ‘80s and ‘90s indie rock scene.

During his past battles with addiction to cocaine, heroin, and alcohol, Forrest once almost killed himself onstage, and infamously mangled the “Star Spangled Banner” so badly at a Clippers game he become a minor sports celebrity. After 24 attempts at rehab, Forrest finally recovered from addiction in 1996 — eventually going from celebrity drug-runner to celebrity drug-counselor and Dr. Drew Pinsky's right hand man. A fixture in the recovery community, Bob Forrest has appeared alongside Pinsky in Celebrity Rehab and Sober House.

Bob is on tour this month, and will be making some select appearances with Survival Songs' producer Ian Brennan at book stores around the country.  Brennan celebrates the publication of his debut fiction book, Sister Maple Syrup Eyes, which follows on the heels of the publication of his two two non-fiction works.

BOB and THE MONSTER on DVD and Blu-ray October 1