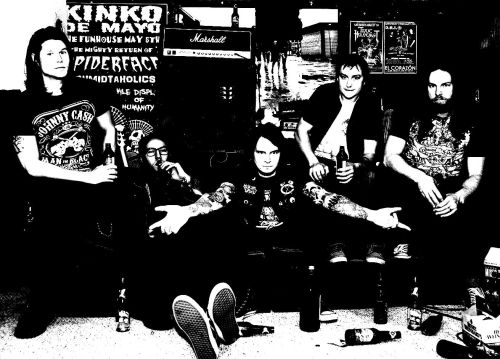 Doug, Jake, David, and Marty tell it like it is about their punk rock/thrash metal with hardcore roots sound and trenchant lyrics about the current econo-socio-political state of the U.S.

Heya guys!  Wow, I was so blown away by the 20 ultra-speedy ‘n’ aggressive ‘n’ thought-provoking tracks of your recent self-titled sophomore album.  I’m really enjoying your punk rock/thrash metal hybrid with hardcore roots sound.  Who’s currently in the band and what instruments do you play?  I think you’re looking for a new drummer now...?

Jake: We’ve got Doug Mitchell on vocals, Jake Youngberg on guitar and vocals, David Foster on lead guitar, and Marty on bass.  Yes, we are currently looking for a new drummer.

Doug, I really like that I can mostly hear what you’re shouting on your tunes!  Did you make a conscious effort in recording to make sure your vocals could be heard above the instrumentation?

Doug: We find our lyrics really important, and wanted them prominent in the mix.

David, I’m not sure I read this right, and maybe I don’t understand the latest technology for recording material, but was the album somehow recorded to your laptop?  Does that mean you didn’t create the album in a studio setting?

David: We transformed our practice spot, which was Marty’s basement, into our studio.  I did the mixing and mastering at home.

Jake: Studio space is very expensive and when you work full-time for a living you have to make the best of what you got. So we decided it was best just to do it ourselves.

Who is the songwriter in the band or do you all share in this duty?

David: We are all songwriters, and sometimes we just write a song and bring it to practice…

Doug: …but usually a couple of us will get together on a riff and all work together.

Your band name and song lyrics are raging indictments of the social, economic, and political downward spiral that the U.S. is experiencing.  You basically dredge up all that is royally wrong with society today, from economic inequality (“Minimum Wage”) to mass murderers (“Time To Die”) to social and familial disconnect (“Bleeding Out”) to personal failure (“When You See The Light”) to false power (“Pipe Bomb”) and more.  Have these systemically entrenched problems affected you all directly or are you reacting to what you see and hear in the media?

David:  Keep in mind, we’ve all had our troubles, more than enough to keep writing this style of music for the rest of our lives... but we do keep up with what’s going on to help relay the message.

Marty: It’s hard to ignore all the horror of news and not be affected by it one way or another.  Our job is to inspire people and not to just ignore what’s going on.

Jake:  I have personal problems and tragedy in my life which has influenced who and what I am… but I’m basically just commenting on how I lived, what I hear on the news, and what’s going on around me... and that’s what inspires me to write.

You’re based in Seattle, Washington at this point and I was wondering if this region has been influential in shaping your viewpoints or if other geographical locations have had more effect on you.

Jake: Yes, there is a major change moving across the country from Chicago, the only city I’d known, to Seattle. Chicago is a violent, fast-paced city which I loved. But living there for so long I knew it was time for a change… but realized whereever you move, the same vile shit happens. You can’t escape; there is horrible shit no matter where you go.

David: It was huge change; we grew up in south side Chicago area… which has a tendency to be uglier than most places, but has a strong community and an older culture… to a place filled with great scenery but more distant people... definitely affected the way we write.

If you want to go into it, in your opinions, what do we need to do to fix this country?

David:  We can talk forever about this, but to point out the most important points, to be able to detach from social media and become a part of a community again; a focus on education; and a redistribution of wealth.   An old saying: You can’t have a minimum wage without a maximum, otherwise everything just shuffles upward… We’re not saying to go all-out Democratic/Socialist, but the government needs to start that discussion.

Jake: The only thing that can change the current state in America is a full-on revolt and revolution. I see many other countries rise up and make a change, but America is brainwashed by what the media tells them… and doesn’t know what is actually good for them. A full-on citizen revolution is needed. And that is part of what Vile Display of Humanity is about.

While your songs are dire and bleak on the whole, I see a rare sliver of hope shining through the dark thoughts on “When You See The Light” where Doug exclaims “Dreams of which you strive / Reasons to survive / Good things that you have that make you feel alive / hold on to them tight…”  Do you feel that there are some positives to living in the U.S. today?

Doug: As a musician, especially in the style we play, it’s easy to focus on the things “that are royally wrong with society today”.  When I hear about that stuff on the news and what is happening right down the street, it pisses me off.  You constantly hear how they cut funding to programs that help people, people who need education and food, and people who are addicted to drugs. It’s hard to feel like “the man” has your best interest in mind.  The people who work every day and are “in the shit” have absolutely nothing in common with the people peeking their drones in your window… So as musicians, we want to push the more privileged to be better people by dragging them through the mud a little bit.

Your guitars ‘n’ drums sound is as powerful as the vocals.  What are your musical backgrounds?  I think you’ve all been in other bands before forming Vile Display of Humanity.

David: We are all self-taught and have been in many projects together including Failed Resistance, Hed First, and Active Voice.

Your recent album is actually your second one, with your debut being Beaten, Bandaged, & Ready.  Would you say that your latest album is a continuation in theme and sonics of your debut?

Doug: Yes, it even has some of the same songs from our previous releases.  Technically, this record is our 4th full-length record. It has songs from the 3 others, but recording it ourselves allowed us to take a little more time.  We purposely released these 20 songs in this format because it sums up the best of the best of our musical work from the last 10 years. We really can’t wait to have the vinyl release.

OK, David, you posted a too-funny video on YouTube where you use the band’s song “Martin’s Revenge” to back actor Emilio Estevez’s character’s break-out dance scene in The Breakfast Club.  Where did this zany inspiration come from?

David: For some reason that scene always stuck out; it all kind of happened by chance, with me watching it with that song in mind and realizing that they fit perfectly together.

On Facebook you’ve posted a bunch of truly (and sometimes hilariously) appalling photos of crazy news headlines and street snaps up until last year.  Will you be adding any more photos to document the decline and fall of American civilization?

David: Once things pick back up again, I think we will be posting those again, but not as frequently.

Jake: We loved doing this, but at a certain point we thought we were over flowing people with how horrible Americans were and were taking away from the music, which we love. But we did have fun doing it and are not opposed to continuing on with it in the future.

What’s on the horizon for you guys?

You can also find us on Spotify and Pandora.