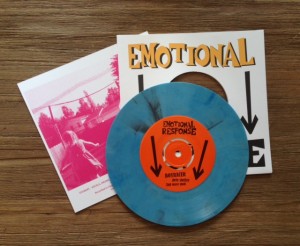 Long-running DIY indie crash-popsters Stewart Anderson and Jen Turrell give a final farewell with a new 7” EP and video.

Celebrated indie-punk-poppers Boyracer have enjoyed a lengthy career in the indie-underworld/underbelly/armpit (depending on how you look at it) with amazingly over 800 commercially-released songs since their 1991 debut. You’d think that's a made up number, but no. Boyracer have released records on such acclaimed and regarded labels as Sarah, Slumberland, Blackbean and Placenta, HHBTM, etc, and at this point have crafted their aggressive melodic pop into a fine art.

Boyracer's recent 7" EP on Emotional Response Records, however, is touted to be their final release, a dazzling 4-song EP of crash pop greatness. It was recorded after a 4-year hiatus and features the only constant member Stewart Anderson, his wife Jen Turrell, and Sarah Records era guitarist Matt Green, making his return to the world of Boyracer after nearly 2 decades. After two and a half decades the needle is still buried far into the red.