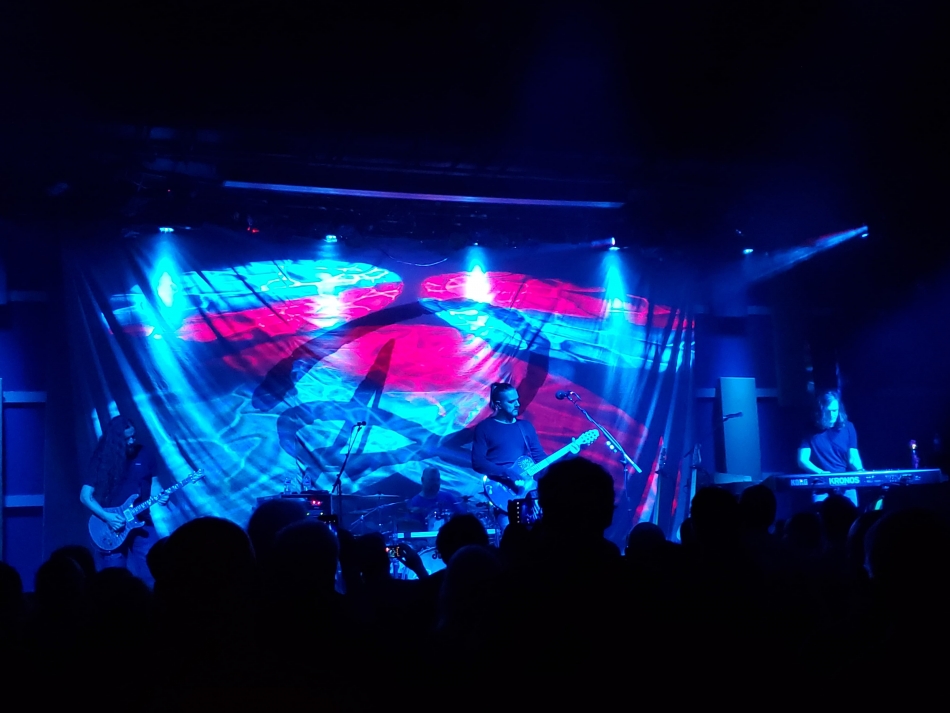 For the past fifteen years or so, Polish progressive rock/metal outfit Riverside has been largely unrivaled when it comes to melding exquisite songwriting and flamboyantly technical yet welcoming instrumentation. They’re easily among the most idiosyncratic, consistent, and treasurable acts in the genre today, and their latest album—2018’s Wasteland—further solidified that ranking without hesitation. This past Friday, the current line-up (vocalist/bassist/lead songwriter Mariusz Duda, drummer Piotr Kozieradzki, keyboardist Michał Łapaj, and guest/touring guitarist Maciej Meller) played Philadelphia’s World Café Live. Despite a lackluster introductory act and limited visual complements, the quartet undoubtedly delivered every ounce of catchiness, complexity, and emotion that the audience expected.

Taking the stage around 8:00 PM was opener Contrive, an Australian metal duo (in the vein of Mastodon, Baroness, and Yob) comprised of brothers Paul Haug (guitar/vocals) and Andrew Haug (drums/noises). They were there to promote their latest record, 2017’s Slow Dissolve, so they obviously played some cuts from that (“What’s Mine,” “You’re Owned,” “Below the Line,” “Slow Dissolve”) and “Spirits Alive” from 2010’s The Internal Dialogue. While the official versions of these songs are sufficiently well produced and arranged—not to mention diverse enough—they coagulated into a mess of screaming, repetitious percussion, and far too faint respites of clean singing and atmospheric transitions. In other words—and despite some occasional resonant moments in terms of spacey ambiance, touching guitar arpeggios, and startling syncopation—it mostly felt like an unvaried and amateurish assault of noise that lasted about half an hour. This is likely due more to the limitations of the live setting than to the pair themselves, but the end result is the end result.

Thankfully, Riverside came out shortly after and blew everyone away. Adorned by thematically alternating lights (blue for sadness, red for aggression, etc.), a large backdrop displaying their emblematic ‘R,’ and screeching strings, they launched into the always gripping “Acid Rain” from the new record. During the closing harmonies, Duda encouraged the crowd to sing and clap along (an element of interaction that continued throughout the night and increased the level of communal splendor each time).  Afterward, they continued to celebrate Wasteland via virtually perfect renditions of “Vale of Tears” (sans the interlocking vocals), “Lament,” “Guardian Angel,” “The Struggle for Survival,” and the title track (during which Duda reached into his “female” range for some really high notes). They also closed the night (as part of the encore) with “River Down Below” and dedicated it to founding guitarist Piotr Grudziński, who passed away in early 2016. It was a beautiful endcap, to say the least.

Outside of Wasteland, some old favorites shared the spotlight. For instance, “Reality Dream” (one of the best progressive metal instrumentals of the 2000s, for sure) was brought out early on, while the first section of their crowning achievement—“Second Life Syndrome”—charmed everyone. Afterward, the gorgeously heartbreaking “Left Out” provided some of the most breathtaking passages of the show; “Lost (Why Should I Be Frightened by a Hat)” countered with colorful optimism; “Egoist Hedonist” brought a bit of funk edge; and “Panic Room” kicked off the encore with alluring industrial paranoia. Whether intentional or not, these sections served as strong retrospectives on their time with Grudziński and how wide-ranging yet reliable their catalog has been thus far.

Paradoxically, every Riverside concert simultaneously delights and disappoints since there are so many great compositions not played in favor of the great ones that are. Even non-LP tracks like “Stuck Between” and the entire Memories in my Head EP (which is basically a three-part, 30+ minute epic) are phenomenal, so it’s nearly impossible for Riverside not to astound on stage. Indeed, their lengthy stint here included one gem after another, and while a bit less focus on Wasteland and a bit more on past material would’ve made their set feel evenly balanced, there wasn’t a single moment that felt wasted. Here’s hoping they find their way to Philadelphia again ASAP.