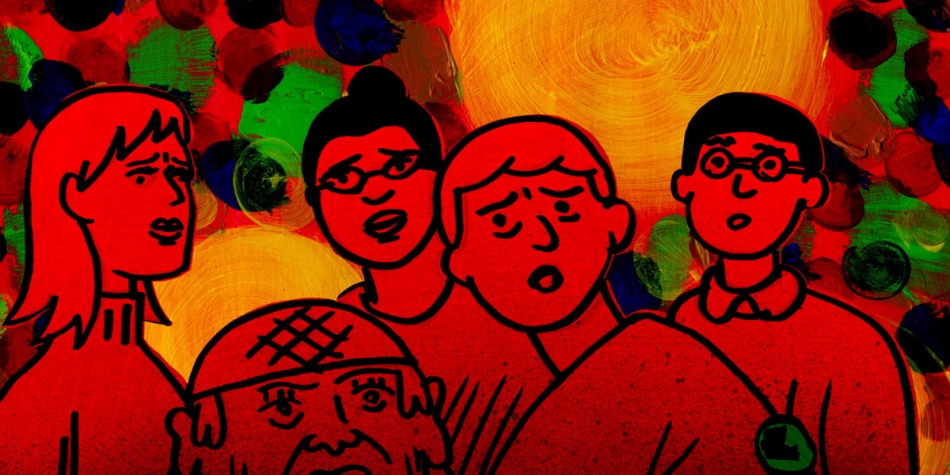 Presented as a coming of age story, Dash Shaw’s 77-minute animation My Entire High School Sinking Into the Sea succeeds in blending a healthy dose of adolescent cynicism with rich, textured and experimental artwork to create a unique and layered film in a vastly different yet welcoming realm from what most large scale animation studios bring to light. Best friends and sophomore students Dash (voiced by Jason Schwartzman) and Assaf (Reggie Watts) settle into their first day back at school. Dash’s negative outlook and banter pours outright as he delves into lengthy prose on how to survive the school year. Remarking on important adolescent issues, Dash has high hopes for him and Assaf to form their own version of the Tides’ High School’s newspaper. When he realizes that his best friend is crushing on the paper’s editor, Verti, jealousy arises and Dash resorts to trash talking Assaf, claiming he has erectile dysfunction. Sneaking into the school’s archives, Dash finds out that the building’s recently built auditorium on an already weakened foundation isn’t up to code and he alerts both authorities and the student body at large. Despite no one paying attention to his concerns, the building does inevitably falls into the sea. What ensues is a comedic-disaster film and the drive for survival, both in terms of what dangers lurk within the ocean as well as the universal plight of prevailing through high school.

For those familiar with Shaw’s graphic novels, the artist/director fuses similar techniques and vivid splashes of color into his film, depicting various scenes as you would read a comic with the use of square panels and angles. His phenomenal use of smoky and life-like textures, including DIY collage scenes, protruding features on each character, and ink bleeds coursing in the background provide endless details and substance for the viewer to get lost in.

Keeping in line with his comics’ deadpan humor, My Entire High School Sinking Into the Sea falls along the path of mumblecore films (Keith Poulson voices as the antagonist and high-school bully and Lena Dunham as the student council president) with themes of Battle Royale and Lord of the Flies highlighted throughout. Designed like an obstacle of hierarchy with the freshmen classes at the bottom of the school and senior classes at the peak, the students must fight their way to the top in order to prevent themselves from drowning. Although the dialogue falls a little short throughout the film, Shaw’s commentary on adolescent obstacles and tropes remains worthy of consideration. When faced with such dire circumstances, students run the gamut of stubborn and selfish choices (“I thought senior boys were supposed to be more mature”, comments one of the sophomores) to solving their individual differences and making compromises to ensure their collective survival. While Shaw’s directorial debut feels worlds apart from the likes of Pixar and technically advanced animation films, it’s certainly a vastly surreal and ingeniously crafted world worth immersing yourself in.