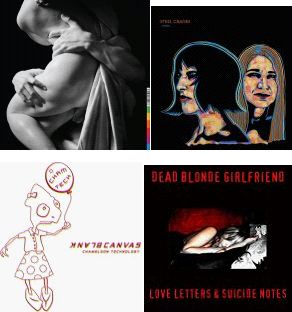 It’s been 20 years since the Australian alternative rock band Pray TV has banged about on the music scene, but its members have come together after this long hiatus to deliver one of its most atmospheric and absorbing albums.  Aidan Halloran, Martin Kennedy, Russell Baricevic, and Joseph Kennedy released Horizontal Life on August 12th and the album deftly balances broodingly foreboding post-punk with thrilling, guitar-driven post-rock.

“Breathing Lessons” is a prime example of this stylistic symmetry as the stripped down verses run on a distant, angular guitar line, subdued bass rumble, and rapidly thumped drums.  Holloran sing-talks in a direct, gritty tone, “Questioning my questioning / when the answer is right here.”  The chorus shifts into a dreamier state filled with webs of burnished reverb guitar, constant cymbal shimmer, a fluctuating, but fast drum beat, and Holloran's hazily drifting incantation of, “Breathe out, breathe out, and in.”


Steel Cranes – “Today Is the Day”

Tracy Shapiro and Amanda Schukle of rock band Steel Cranes dropped their second album, Tango, August 5th via Mister White Tights Records and are currently in the middle of a 40-date tour to support it.  They delivered their debut full-length, Ouroboros, in 2013 to critical raves for its raw and weighty take on the rock genre.  Steel Cranes ups the ante on Tango by adding even more dynamic force, melodic layering of instruments, and an expansiveness to the batch of tunes.

The lyrically uplifting “Today Is the Day” showcases both the sonic heaviness and stylistic breadth of Shapiro and Schukle’s range.  It starts off quietly with a light guitar pattern, ticking percussion, a measured drum beat.  This muted beginning quickly grinds into high gear with a burst of burning guitar distortion, stormy cymbal smash, kinetic drum hits, and the surprising addition of slowly sawing violin strings.  Shapiro sing-talks ripely and emphatically amid the thickly textured sounds, “The birds on the telephone wire were singing me a tune / They said, Don’t worry sweet child of mine / We’re lookin’ out for you.”

Punk/alt-rock/metal Chameleon Technology (or ChamTech) is the one-man-band music project of Californian Max Histrionic and his sound recalls 90s alternative rock greats like System Of A Down and Green Day.  Histrionic formed ChamTech in 2009 and has released the Aquatic EP, his debut self-titled album, and most recently, his 5-song EP, Blank Canvas, in early August.

The title track sonically blends elements of the aforementioned bands to in-yer-face effect as Histrionic exclaims forcefully against the punchy, distorted guitar jags, menacing bass line, bashed cymbals, and choppy, super-fast drums beats.  On his acute lyrics, Histrionic emotes about the two sides of a failed relationship and of altered perceptions, shouting out, “Hey, it isn’t real anyway / Hey, from the truth it is so far.”

DBG has followed up lead single “Horror Show” with the Ramones-like, mid-tempo rocker “Hello Goodbye Girl”.  Against the chug of grinding guitar riffs, a jumpy bass line, flitting cymbal hits, and quick drum beat, Blaney and his lyrics stand out starkly as he sing-talks plaintively on the chorus refrain, “Hello goodbye girl, hello / Sorry, so sorry to see you go.”  He’s backed by lighter female vocals on a brief break in the tune’s Verse, Chorus, Verse structure, before plunging back into the gritty, garage-rock chorus.