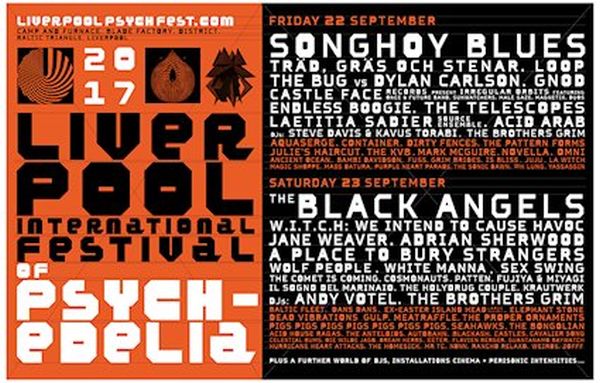 Renowned Liverpool Psych Festival gears up for the 2017 season on September 22nd to 23rd with a pre-show kick-off on September 21st.

The Liverpool International Festival of Psychedelia (a.k.a. Liverpool Psych Fest or PZYK) kicks into overdrive on September 22-23, celebrating artists operating at the cutting edge of today’s global psychedelic renaissance, alongside visual art, film, performance. and mind-expanding visual delights. Once again, masses of psychedelic activities will pack the warehouses and recesses of Camp & Furnace, Blade Factory + District in Liverpool’s so-called Baltic Triangle for a global psychedelic frenzy.

Liverpool Psych Fest is a frontrunner of the psychedelic scene, while communities and festivals are flourishing in a global movement of consciousness. Prepare for the time of your life as PZYK presents a whole host of sonic and visual delights in multiple dimensions. This is a true exploration and celebration of extremes. High on visual aesthetics, this festival combines post-industrial architecture with its acid house rave atmosphere and art gallery space with an awesome village community mentality. This cohesive approach makes for a breathtaking art installation that comes across like a psychedelic technicolor dream.

Following its fantastic inception in 2016, PZYK COLONY – an immersive, 360-degree audiovisual installation – will again transform the Camp warehouse space into a late-night shifting, geometric cube from 11pm to 3am throughout the festival. The live installation re-imagines this industrial space as an intense, singular light-emitting diode, a trance-den-cum-live-space, and will play host to much anticipated performances by The KVB, Loop, The Bug vs Dylan Carlson, Sex Swing, The Comet is Coming, and Adrian Sherwood.

One of the stand-out events is a showcase from California’s Castle Face Records, called ‘Irregular Orbits’, which involves five bands from the label’s roster – Once & Future Band,Male Gaze, Magnetix, Duds, and Exit Group (Useless Eaters side project). A world-first for the label, which is now one of the world’s leading off-kilter psych music imprints.

This is the sixth year for the festival. The first festival took place in 2012 and was an international event from the outset. In just a few years, this has become perhaps the most renowned Psych Fest in the world. In fact, it was named ‘Best Small Festival’ at the 2015 NMEAwards.

PZYK presents a special Psychedelia In Film season, with screenings at FACT (Foundation for Art and Creative Technology) of a series of short films drawing on the theme of sensory overload and excess. The screenings will be accompanied by specially curated PZYKplaylists in the Picturehouse bar, plus a Q&A with PZYK organizers around the festival’s themes.

Festival-goers will also enjoy the Musings In Drone symposium, which is a tripped-out chat show, digging out the stories, tales and experiences of the artists, labels, and heads within today’s neo-psych scene. Hosted by audio-oracle Bernie Connor from the Sound Of Music podcast, this edition features Q&As with The Black Angels, collaboration with the #AUDiNT research cell (an investigation of sonic extremes in A Century Of Zombie Sound presentation), and W.I.T.C.H.’s Emmanuel ‘Jagari’ Chanda with collaborator Jacco Gardner. Matt Jonesof Castle Face Records will also talk about the label’s journey from the Californian underground to the world-class psych label it is today – and he will be joined by guests from the label’s roster.

All of the above are carefully curated elements that give Liverpool Psych FestIval its global appeal, and the 2017 edition will undoubtedly become an even more attractive prospect for fans of psychedelia. Running with the motto “THIS FESTIVAL WILL DESTROY YOU”, the organizers qualify it with the statement “unless it destroys us first”. Prepare for the PZYK of your life… but if you can’t be there, California’s KFJC 89.7FM will be broadcasting the festival live from the four festival stages, as well as interviews, online via KFJC.org and on FM in the San Francisco Bay area.

More detailed information, as well as weekend and day tickets, are available from the Liverpool Psych Fest’s official site