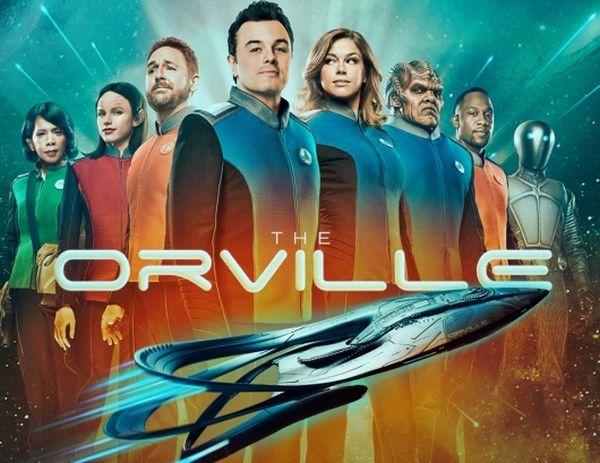 The Orville – Photo courtesy of FOX

The premiere episode of Seth MacFarlane’s sci-fi comedy The Orville is boresville.

Caveat: The following review is based only on the 1-hour premiere (Old Wounds episode) of the highly anticipated TV series The Orville, which debuted on FOX.  Do I need to mention that there are huge plot spoilers below?

The Orville crashed ‘n’ burned this past Sunday night.  Sorry, maybe that’s too harsh.  How about this: It never got out of the docking bay.  Or, it didn’t even achieve “Mock” 2, let alone “Mock” 5.  Or feast upon this choice morsel: The Orville spoofs Star Trek, but ends up as subpar star dreck. Ouch.

There’s no doubt that Seth MacFarlane is a talented individual. Creator of the animated TV series Family Guy and co-creator of TV shows American Dad! and The Cleveland Show, he is also a producer, actor, writer, and crooner at the mic. Seriously, he has three Rat Pack-inspired albums out.

The Orville, airing on the FOX network, is MacFarlane’s latest venture, this time probing uncharted science fiction territory (at least for him).  Let’s get straight to the space chase: MacFarlane doesn’t know whether The Orville should be a smart aleck send-up of previous sci-fi entertainment or if it should be a quasi-sincere homage to the space exploration compendium.  So he aims straight down the mostly mundane middle for a smattering of laughs that fall flat, been-there, done-that scenarios, and familiar heroes and villains.

When Isaac (Mark Jackson) from Kaylon 1, the artificial life form science and engineering officer with the Brent Spiner-like voice states that his time aboard the U.S.S. Orville is, “…an ideal opportunity to study human behavior.”, Captain Mercer (MacFarlane) shoots back with the loaded reply, “We’ll try not to bore you.” Too late, at least for this premiere episode.

The Orville is grounded by hokey sci-fi décor, costumes, and special effects (Maybe that’s on purpose; maybe there was no budget), dull and sentimental ex-marital melodrama, juvenile humor (Well, based on MacFarlane’s track record, that’s to be expected), and sci-fi genre tropes.  Sitting through The Orville was like viewing an hour-long, not-so-funny sitcom set, and lost, in space.  Sure, the small talk and spaceship maneuvers may be a bit subversive in relation to the science fiction cannon (Did Kara “Starbuck” Thrace ever “hug the donkey”?), but the rest was stale.  When Captain Mercer is ready to engage “quantum drive” (not Star Trek: The Next Generation’s warp speed) engines of the U.S.S. Orville, he commands Lt. Malloy (Scott Grimes) to, “Take us out.” It’s a little bit funny, but why not have a more memorable and flip catchphrase like, “Let ‘er rip!” instead?

There were maybe a total of three outright amusing, albeit brief, scenes in the whole show that were worth a giggle.  The first was when a nervous Mercer is in the Admiral’s (Victor Garber) office and he asks, “Can I have one of these mints?” while popping the tidbit into his mouth from a dish on the Admiral’s desk.  The Admiral rapidly replies, “Those are marbles.” and Mercer spits it out right quick, and directly back into the dish.  Yeah, you have to watch it for the full effect.  Comic timing and all that jazz.

The second scene was when Captain Mercer runs down the hallway of his ship and through (not into) a gelatinous blob – and then says, “Sorry man. You OK?” to the crew member who replies that he’s fine.  In a similar set-up, the third surprise has the Orville’s crew walking through the Epsilon Science Station.  One of the officers stops to stare at a biodiverse aquarium when suddenly a chittering, three-eyed creature with tentacles pops out of the murky waters – and is introduced as Dr. Jorvik, the chief botanist of the scientific team.

The Orville saves its best sci-fi effects for a last-blast climax of action, the outcome of which is telegraphed too far in advance.  Confronted by the enemy Krill’s ship that will overpower them, Captain Mercer and his first officer (who is also his ex-wife) agree to surrender a valuable time accelerator apparatus.  They then secretly attach a tree seed to the opening of the device, where a ray can shoot out to speed up time.  Once the time accelerator is aboard the villain’s vessel, the captain gives the command to start up the machine, exclaiming “Happy Arbor Day!”  A giant Redwood tree begins growing at hyper-speed, bursting out of the enemy’s ship like an alien in…well, Alien.  That visual satisfaction is short-lived however and soon the Orville’s crew members are quibbling about who understood what Arbor Day means… D’oh!

For a truly thrillingly wild sci-fi (and so much more) ride, it would behoove you to watch the late and lamented Australian-American Farscape TV series, an imaginative, inventive, spunky, sharp, sarcy, snarky, serious, silly, and spectacular creation from Rockne S. O’Bannon.  Live actors and animatronic puppets (courtesy, amazingly, of The Jim Henson Company) interact (with some puppets, like Rygel, having as much character as the real actors!) within a diverse, but universal, ummm…, universe filled with life and death, love, hate, betrayal, hope, joy, sorrow, secrets, lies, surprise, and wonderment – and of course copious amounts of action, comedy, drama, romance, and fantastical science fiction.  So fix a little snack, kick back, and escape the everyday by binging on the extraordinary four seasons and 5th season mini-series of Farscape.