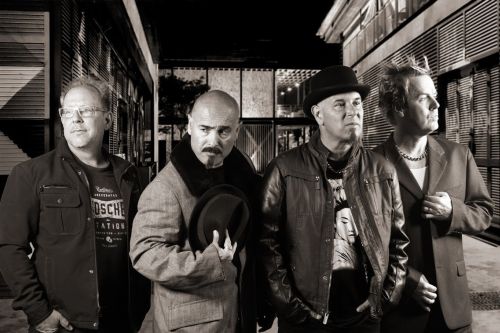 WANK originates from Huntington Beach, California during the heady and hoppin’ days of the mid-1990s when pop-punk music was all the rage. The Orange County act has kept the flame alive all these years (decades!) by mixing pop melodics with grittier rock, rhythmic ska and reggae, and enthusiastic punk energy and attitude.

Founding members Bobby Amodeo (lead vocals, bass), Danny Walker (guitar), and Spider (drums) have been through one helluva rollercoaster ride through their career with big ups, like being produced by Mike Ness of Social Distortion in the ‘90s, airplay on radio giant KROQ, and a record deal with Maverick Records (back when it was all-important to sign on the dotted line for ensured success).

There were major downs too, with Amodeo battling cancer in the 2000s – and surviving - and now thankfully restored to fightin’ form, as well as a long hiatus for the band while Walker and Spider went on to other cool musical endeavors.

WANK is now back, fully intact, and on the musical attack, even adding Higgins X-13, formerly of The Offspring on guitar last year. They’ve just released their new album White Knuckle Ride, available exclusively at their own website (link below).

White Knuckle Ride was produced by the band and Paul Miner, with the exception of “Salvation”, which was produced by Chris Schiflett of Foo Fighters. The album was engineered, mixed, and mastered by Paul Miner at Buzzbomb Studios.

In a Rebel Noise exclusive, Danny Walker has generously taken his time to dive into the LP’s tracks to give some insight about each of them:

Key G – An inspired-by-my-son track about adventure, hope, and discovery.  “I run with my dogs on a Friday night, Old Towne Orange, and I feel alright. Into the dark, feeling no pain, Ride the night again…”  We just made a video for this one - Keep your eyes peeled.

Key E – A reggae-feel track featuring keys by George Hughes Jr. (Ziggy Marley) – the song is an autobiographical snapshot – feeling easy in California. “You can’t stop my beat, roll another joint for me – hey - Easy don’t come cheap with these angels dissing me. Roll on don’t you know, light up and let it go. Relax and crack a smile, lay back and watch the world go by…”  Summer smash?  Hmm...

Key G – an autobiographical rock track about making mistakes and seeking redemption.  Chris Shiflett (Foo Fighters) produced this track and played the guitar solo.  I used to play this song acoustically in Rockers in the Round, but Chris produced it as a rock anthem for WANK. “It took thirty five years for me to figure out. Giving all I can is what life is about. Try to open my heart, hope I’m not too late. If I can make a difference I don’t want to wait. I’ve taken love taken trust and it’s taken its toll. I’ve taken drugs and blood money and they’ve taken my soul. I wanna change my ways, I wanna get it right – C’mon…”

Shiflett is a great guy and killer producer.  Another really cool part of this track is that punk legend Steve Soto (Adolescents, Rockers in the Round) sang the back-ups on the choruses.  I miss my man.

Key D – an anthem about going for it.  Charging forward without a fear of failure. “I’m a man on a mission, my transmission’s getting hot. I’m shooting for the moon, but the stars get in my eyes. Hold on, Hold on, my baby. My engine’s shot, but I keep Rollin’ On…”  This is old school classic WANK.

Key G – a reggae song featuring keys by George Hughes Jr. (Ziggy Marley) about the parallels of music and love. “Running and rambling night after night, deeper in darkness I run for my life. Taking me higher and curing my pain, shining a light girl, you show me the way…”  Watch out for the slow Angus lick on the solo – get some.

Key D – a rock anthem about refusing to take NO for an answer.  Make it happen. “Pick yourself up. By the bootstraps and give us a laugh. You’re oozing with coolness. Step on the gas, heighten the madness. This is your life. Never surrender, Reach for the Sky. Make up your mind. Take what you want, step to the inside…”  Be relentless and see what happens.

Key A – a payback song.  Taking it to somebody who clearly underestimated you. “Spitting venom all around as if you got the right. Thinking that you’re special, but that ain’t gonna fly. Breaking every promise and you’re living out a lie. Dominoes are falling and you’re running out of time. 24 hours ‘til I knock you out. Woe, I’m gonna Shut You Down…”  Tracking this one was therapeutic.  Check out the video for “Shut You Down”, our first single from White Knuckle Ride.

Key A – a reggae song featuring keys by George Hughes Jr. (Ziggy Marley) – It’s about me, my bro, and our friends back in high school, all metal-heads, cruising the mall, owning it.  Lyrics are some of my favorite rock songs from back in the day. “Down to the mall, balls to the wall. It’s a long way to the top so we’re breaking the law – na na na. When the lightning strikes, Ripped jeans and spikes. We’re rolling thunder. Screaming in the Night – na na na. We Wanna Rock, We Wanna Roll. We got the melody, gonna take your soul…”  Metal lyrics to a chill, minor reggae beat.  Who knew?

Key A – featuring keys by George Hughes Jr. (Ziggy Marley) - a melodic pop song of love and loss. “It was you, filling my eyes up with blue. You gave me more than the truth, something to lose. It was you. It’s your heart, I took it and tore it apart. Dropped like a falling star, broken and scarred. It’s your heart…”

Key F – featuring keys by George Hughes Jr. (Ziggy Marley) – a song about making mistakes and wondering – will I be forgiven? “And then the lightning comes. Somebody stole my heart. Now I can't explain. Where it is I'm going Down to the river…” This is a re-track of WANK’s first single – solid.

For a fun, dynamic, and engaging blast of awesome pop-punk/reggae-rock tunes cruise on over to WANK’s website and snag their tasty platter here:

Also check out the sneak-peak session for the upcoming video for the rockin’ “Salvation”: