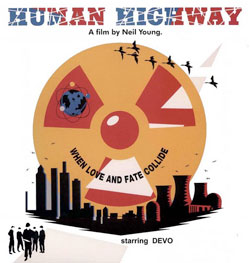 Scroll down for video clip of Neil performing with Devo from the movie.

A Director's Cut of Neil Young's 1982 film, Human Highway, is to screen at this year's Toronto International Film Festival.

The full line-up and schedule for this year's festival will be announced on August 19.

You can find out more information about the screening here.