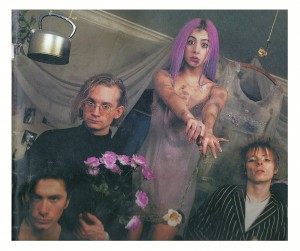 Buzzsaw Records is pleased to announce the new SPECIAL EDITION release of the unique 1992 album Eleventeen by Daisy Chainsaw - one of the original grunge/post punk bands.

This special edition includes two CDs comprising the original track listing plus B sides, the 3 eps, never before released tracks, never before released photos, original artwork and commentary from band members, photos and a written piece by Mic Mercer.  This small run special edition release (1000 copies) has been soley put together by founding band members Crispin Gray and KatieJane Garside, it's theirs as they want it to be.

You can ORDER IT HERE:  http://katiejanegarside.com/shop.html

and also at the new daisy chainsaw website:  http://www.daisychainsaw.net/

Just A Few Words From A Few People You May Have Heard Of :

“I like Daisy Chainsaw, I thought their ELEVENTEEN album was wonderful!” – Dave Grohl when asked who his heros of the 90′s are.

Daisy Chainsaw formed in London in 1989.  Lead singer Katie Jane Garside responded to an advertisement for a female vocalist in the (now defunct) Melody Maker. The ad was placed by one Crispin Gray, guitarist and great nephew of John Gray (British poet and inspiration for Oscar Wilde’s The Picture Of Dorian Gray). The line up was eventually completed with drummer Vince Johnson and bassist Richard Adams (who played the seminal bass part in Daisy Chainsaw’s single "Love Your Money", admired and referenced by, among others, Muse and Jesus Jones).

"Love Your Money" was an unexpected national UK hit, which was quite an achievement for a grungey punkish band like Daisy Chainsaw at that time. They went on to appear on TV shows like The Word and Rapido but, in true punk fashion (unlike many others who claimed to be so but capitulated), they turned down Top Of The Pops. They followed with the single/EP Pink Flower, an indie number one, and eventually ELEVENTEEN. Never ones to jump on a bandwagon, Daisy Chainsaw stood almost entirely alone but found in producer/engineer Ken Thomas (Sigur Ros, Dave Gahan, Public Image, Cocteau Twins) a kindred spirit and together they produced this remarkable, uncompromising and individual album.

After completing a world tour the band imploded under the strain of commercial expectation but Garside and Gray eventually went on to form the acclaimed Queenadreena a few years later. Katie Jane Garside now records under the name of Ruby Throat www.katiejanegarside.com and Crispin Gray (aka John Orion, his middle names), along with Vince Johnson from Daisy Chainsaw, plays in The Dogbones [url=http://www.thedogbones.co.uk]http://www.thedogbones.co.uk[/url].