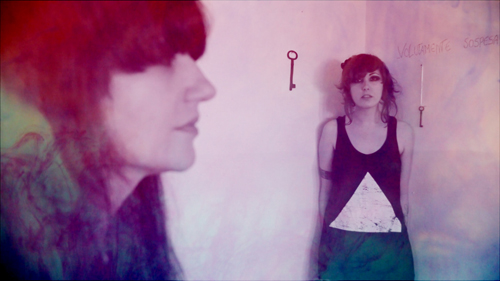 The London-based duo will release an album on Saint Marie Records in 2014.

“Dream of Bees” is the first single from Lilies on Mars’ full-length "Dot to Dot", to be given worldwide release early next year on Saint Marie Records. Previous recordings by the London-based, Sardinian multi-instrumentalists Lisa Masia and Marina Cristofalo have established the duo, formed in 2009, as purveyors of poignant, otherworldly “retro-futurist” dreampop.

“Dream of Bees” opens with a hovering organ chord that’s quickly overtaken by an instrumental preview of a chorus that always pulls the listener aloft on a softly turning but slightly dizzying carousel of sound, an image bolstered by a vertiginously calliope-like keyboard line. With the first verse commences a high, distant vocal that soars gently through the rest of the track. Nimble drum work contributed by Valentina Magaletti ensures that the proceedings never quite touch the ground.

The first remix included with the single comes by way of San Francisco’s ethereal pop team Silver Swans, whose sparer, more synthetic approach to the song brings the vocal line to the fore and uses programmed drums to pull the track’s rhythmic emphasis inside out. A remix by Vancouver-born, New York-based cellist Julia Kent startlingly recasts “Dream of Bees” in purely instrumental terms with an exquisite string arrangement.

We Destroy the Family: Punks vs. Parents (a PSA courtesy of the closed minds of 1982)