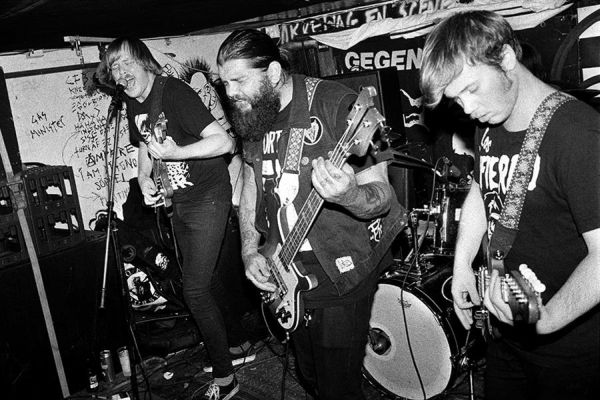 Wet Dreams, which features members of Death By Unga Bunga, FOAAAM, and Warp Riders, will drop 3-song record on May 17th.

Norwegian music project Wet Dreams is a collective of musicians whose interests include modern psychedelic hard rock and punk.

Sebastian Ulstad Olsen (Death By Unga Bunga), Eimund Aadahl (Warp Riders), Per-Richard Ottosen (Warp Riders), and Bendik Pettersen (FOAAAM) have all made their names in other acts, but they decided to band together as Wet Dreams in 2015.

The group is readying to release a debut Cartridge Belt 7” on May 19th via Norway’s Black Pop Records.  The 7” consists of 3 songs that thematically touch up war, rituals, and the journey of the mind’s eye.  The act’s songwriter Olsen states, “I love music that bends the rules, so Wet Dreams is a great laboratory for this purpose.”

“I Can Fly”, the lead single off the 7”, is a turbo-charged, fuzzed-up noise rock number that dynamically shifts from lower to higher gear and back again throughout the song.

Song Premiere: “Stand Up” by Ayron Jones and the Way