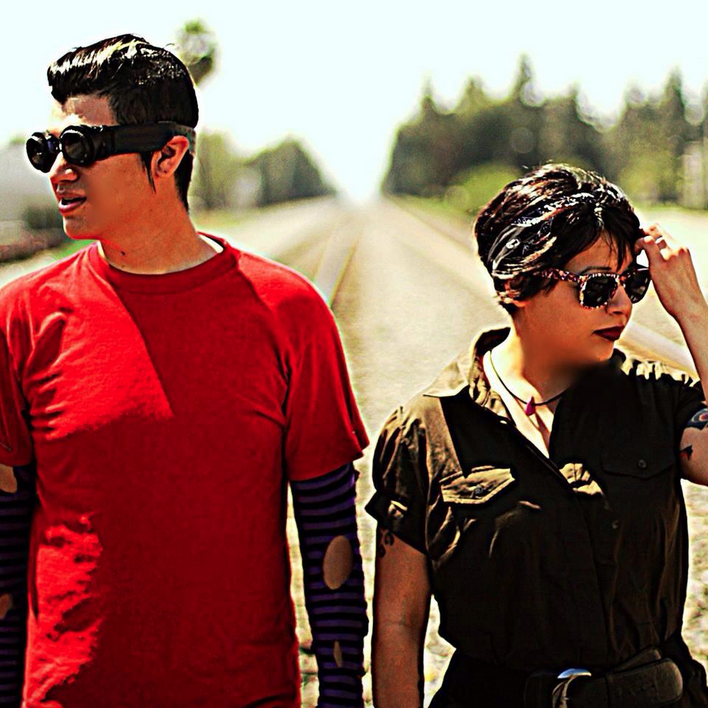 The two-piece Rock 'N' Roll Suicides was formed in the summer of '09, after a rehearsal for Agents Of Kaos, the members former band, was cancelled last minute. Nothing else to do, Jeanette and Rudy headed to the studio anyway, and ended up writing their first song "I Just Came To Watch You Burn”.  The two decided then that they would keep making songs together.

A little history... Rudy had started Lower Class Kids with old friend Phat Mike, biker friend Bass Mike and Jeanette's brother Louis. Rudy stood in for bass or guitar with a lot of other bands which eventually landed him in a band called The Nipples. When those two bands had had called it quits, Rudy started Agents Of Kaos with Jeanette, Phat Mike and Reverend Mike. Jeanette had played bass primarily before taking up the drums for Rock 'N' Roll Suicides, jamming in a pop punk band called Idol 44, and Magnavox with Toni and Doreen.

Within the first year of starting Suicides, they had written and recorded enough songs for a full-length ep.  Within 5 years, they’ve self-released two full length albums, one 7" EP on hot pink vinyl on Wolf On A Bridge Records and have done 3 tours in AZ, NV, OR, WA, and up and down CA.

When they're not at band practice you might find the two vinyl shopping at Black Hole in Fullerton, Amoeba in LA or Meow Meowz in Pasadena. They keep a hectic gig schedule but on nights off the pair frequent The Doll Hut in Anaheim and The Redwood in LA. where they're likely to be catching a performance of their friends "Some Kind Of Nightmare", who they call one of the “hardest working and the most DIY bands” they know. The Rock 'N' Roll Suicides are pushing for a fall tour this year so keep your eyes out on the following sites for details.