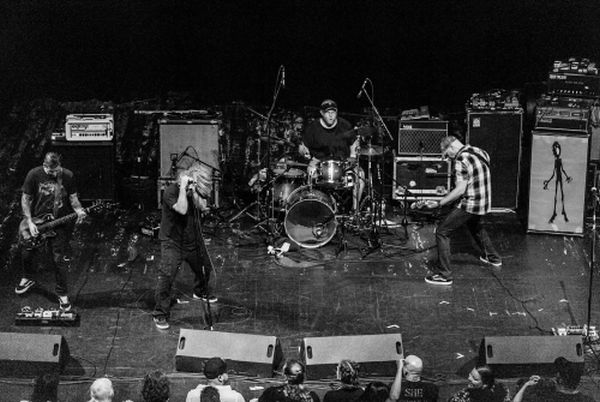 Long-running Reading, PA-based band Anthrophobia are back with new record Altered States EP, which released this past August via Code 3 Records.

Altered States was recorded this past March at Magpie Recording Studios in Baltimore, MD with producer/engineer/musician, J. Robbins (Clutch, The Sword, Local H, Against Me!, Jawbox).

As a rad bonus, the vinyl and digital formats at Bandcamp also contain the 5-song Grind EP, plus 4 more unreleased tracks for a total of 15 songs.

Operating since the ‘90s, Anthrophobia built up a fervent fan following in the Philadelphia region, playing tons of shows and sharing stages with legends the Ramones and Bad Brains. In 1998 they made their mark on the chart with hit “Vanished” and were part of the Van’s Warped Tour.

Anthrophobia retired in 2007, ending (temporarily) on a high note, but then returned to the music arena in 2015, still highly-charged and with something to say. Over the decades they released a slew of music, with Altered States being their 3rd EP in only the last four years!

Earlier this year the band also created the theme song for Amazon Prime’s animated show Fundamentally Cynical and are crafting more music to be used in the series.