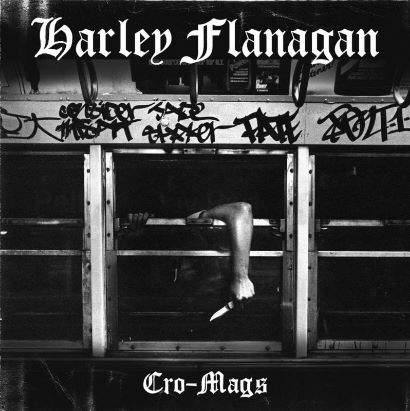 Harley Flanagan, a founder of the legendary hardcore/punk/metal band Cro-Mags, returns with an explosive solo album.

Cro-Mags features twelve all-new tracks, boasting brutality in the vein of the Cro-Mags' "Age of Quarrel" and "Revenge", exploding with powerful force and pure, aggressive intensity.   This is the return of the NYC hardcore icon. To order Cro-Mags, visit the MVD Entertainment store here.

"I first started writing the album in 2012. My intention was to write a bunch of short fast songs- old school style- the way I did it in the early days," states Flanagan. "I started tracking all the songs myself. Originally, I tracked them all on acoustic guitar, then I put drums on some of them."

Produced by Flanagan and Pete Thompson at HoboRico Studios in Hoboken, NJ, the album features a collection of contributing musicians. Flanagan plays all of the instruments except for the drums, which are performed by Pablo Silva. Additional guitars parts were performed by Pete Thompson and other friends and musical companions of Flanagan's.

Flanagan adds, "My friend Pablo Silva came in on drums, with me playing bass. I put down some guitar tracks and then I had several friends also on guitar including Pete Thompson, who recorded and co-produced the record with me, Sean Kilkenny, who has played with me for years, as well as many other NYHC bands, Gabriel Abularach who had played with me in Cro-Mags, back in the 90's during the Alpha Omega era, and Albert Romano."