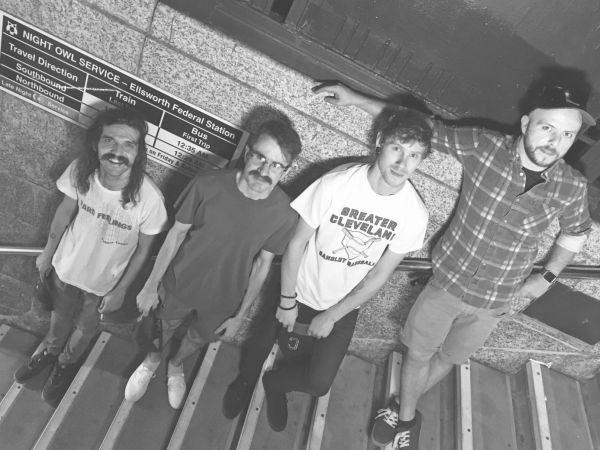 Harvey Pekar (named in tribute to the Cleveland comic book writer) will release their third album, Paris Green, on May 17th via Steadfast Records. The LP consists of seven new tracks which were produced and engineered by Ryan Foltz at Cleveland Audio (Dropkick Murphys, Rancid).

Paris Green builds upon the band’s previous albums, 2013’s debut Upward, Not Northward and The Astral We in 2016, while breaking through the hardcore and punk genres’ confines.

Rebel Noise is stoked to be hosting the premiere of “Drag Hesitations”, a restless and raging number from Paris Green. The track heaves heavily and then surprises with sudden lunges and quick sprints all while roiling with thick guitar churn, a lurching bass line, and rapid-fire to pummeling drum beats. Vocalist Nick Kratsas’ potent purged exclamations tear into the vivid lyrics with fiery passion, matching the incendiary burn of the guitars.

Kratsas reveals the meaning of “Drag Hesitations”, stating, “[It] speaks to primal communications between human beings – dances of violence and love. While we commingle to grow and shape one another, we ultimately remain isolated by the limits of our bodies, our mortality, and our need for self preservation.”

Harvey Pekar have been on the road for the past six years, hitting venues across the U.S. and Canada, sharing the stage with bands like Defeater, A Wilhelm Scream, Code Orange, Such Gold, Idles, Birds in Row and Knocked Loose. They’ve also been tapped as one of four recipients of a 2019 Panza Foundation grant.

Harvey Pekar will be touring extensively throughout this summer in support of Paris Green.