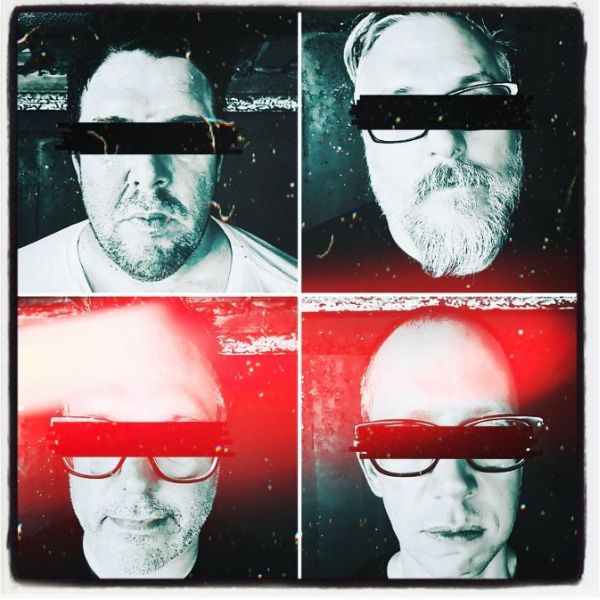 Chicago-located musician and director of Council Records (1992 – 2006) Matt Weeks, a veteran of the notable punk and hardcore bands Current, Calvary, and Ottawa, kick-started Wrong War in 2019.

Weeks (lead vocals) is joined by Patrick Keenan of guitar and Dave Pawlowski on bass (who both were part of the outfit The Phenoms), as well as drummer Dan Smith (noise, samples), who’s in Salvo Beta.

Wrong War’s roots are inspired by the Chicago and Detroit punk and hardcore music scenes, as well as DC punk and Dischord Records’ roster.

The incendiary 9-song Fixed Against Forever was recorded (and mixed by Michael Manthei) during the summer and fall of 2020 at Eberly Studio.

Fittingly released on Election Day in the U.S., the blazing Fixed Against Forever is a politically-charged and aggressive blaster.

Rebel Noise is stoked to host the premiere of the searing “First Shot Misses,” a relentless missile that explodes with sonic and emotional fury.

Weeks details the lyrics’ meaning, relating, ““First Shot Misses” is a song about not losing hope, second chances, and perseverance. Victors will write history. You have seen their rough draft; don't let them finish the book.”

Keenan adds, “Musically, for this song and much of the entire album, we just kind of slam on the gas and don’t let up. Writing these songs is very much a collective effort. The sample at the end of the song is Dr. Cornel West who is a professor, philosopher, writer, and activist who we all admire.”

Weeks also divulges some details about Wrong War’s upcoming debut album and how they’re dealing with the pandemic in this exclusive Q&A:

It's exciting - and anxious - times before the release of your new EP on November 3rd, which is also Election Day in the U.S. How are you holding up? Were you able to vote early to kick the current MF out?

It is a strange time for everything. I think for the most part, we have all managed to do well enough. Currently we are all healthy, yet the walls do feel like they are closing in on us in several regards. The pandemic feels more and more pervasive, the current political climate in America is worrisome, and the future still looks rather bleak.

Making music now feels both unnecessary and necessary at the same time. It was good for our mental health to do something, anything, while screaming loudly… and of course voting early.

Tell us about Fixed Against Forever. Is every track a blistering politically targeted ballistic missile?

I didn’t realize it at first, but the album as a whole sort of became a breakup letter with half of America, a letter I am pretty sure I already sent many years ago, but was never delivered. Lyrically it is personal, so therefore it is political, but not in the traditional sense of rallying cries or sloganeering.

Ultimately it is about working out the increasing complicated relationships we all find ourselves in now, with equal measures of disappointment, anger, frustration, hope, and liberation.

Did you record the album, or finish it up, during the pandemic? If so, could you all be in the same room; i.e., have you all been isolating together (now there's an oxymoron!)?

We started writing songs in the Fall of 2019, but didn’t get very far before the quarantine went into effect. We used the first few months to plot, strategize, and write. In early July we all agreed that the slight expansion of social circles was going to be a necessity, and with that we were able to find a way to practice safely for a few months and finish the songs. Recording took a little bit longer, but the process wasn’t all that different; we just limited recording sessions in length and to the necessary people.

What's life like for you now during the pandemic?

We all have work and have kids, so most of our time is spent dealing with one or the other. In the time in between, I have been able to stay busy. I am a hobby-oriented person, so all this extra time in the house has been put to good use.

Recently I have resurrected my old label, Council Records, and have been working on digitizing the 25+ albums I released between 1993 and 2005, as well as preparing to release the new Wrong War EP.

There are no live shows, so what other avenues are you exploring to get your music heard? Are you doing any live-streams or videos?

We had our first show booked for early April, which of course did not happen. In some ways, that might be for the best as I feel with this recording, we have finally settled into our “sound.”

To be honest, we have been focused on just writing music and getting this recording done; we are only now starting to look at creative ways to get the word out. We truly appreciated the help!