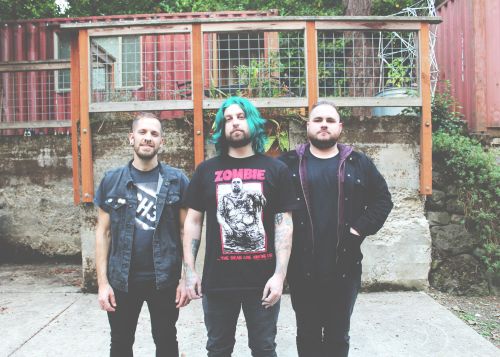 Portland, Oregon-located melodic punk outfit Old Cross will burst out of the gate on November 13th with their debut album Daggers via Zomie! Media Records.

The three-piece create high-octane hybrid music that fuses ‘90s/‘00s California-style punk-pop (The band members were originally based in SoCal and relocated in 2017) with darker melodic hardcore.

They’d been touring three to four times a year before the pandemic hit and plan to kick off more shows once it’s safe to do so.

The new album follows up 2018’s self-titled EP that dropped via No Pants Records.

Rebel Noise is stoked to host the dynamic performance video for the speed-racer of an LP track, “Gates.”

“Gates” flies by at a zippy pace, alternating between slightly calmer verses and antic chorus sections. Blazing guitar rip through the song, while the bass line ricochets like a rubber ball, and the drums are pummeled within an inch of their lives. Vocals are shouted out with impassioned fervor.

The music video is the antithesis of the serious intent of the track, providing some enjoyable relief from the drudgery of everyday life.

The guys (singer-songwriter and guitarist Chris Hahn, bassist Dylan Car, and drummer Cassidy Rife) perform “Gates” with determined vigor, but their playing is intercut with fun footage of a rocketship crash landing on Earth – and a dazed spaceman and his robot (made the old-fashioned way; out of cardboard) companion getting their bearings on terra firma.

They’re hunting a space alien (dressed in a suit to blend in, of course!), chasing it down and shooting it with a laser-gun. The video was directed by Rife and edited by Hahn.