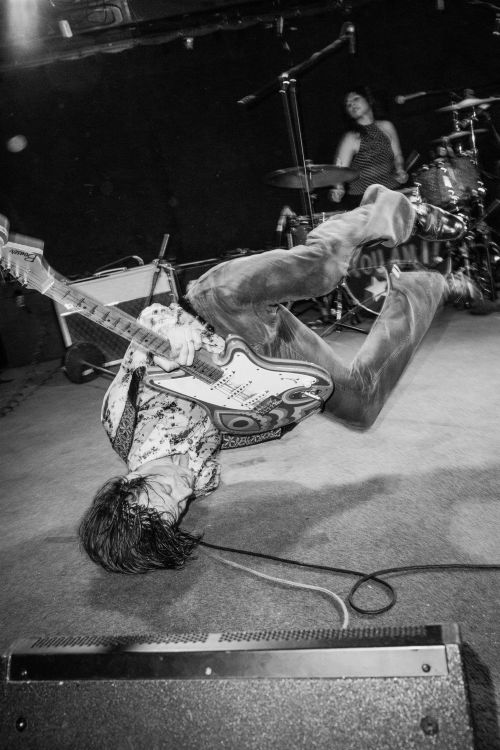 Hailing from San Diego, dynamically fiery and socio-political-tipped rock ‘n’ roll band The Schizophonics are a formidable live and recording act. They’ve played hundreds of shows around the world and have won a grand total of seven San Diego Music awards.

The Schizophonics will be releasing People in the Sky on October 31st via Pig Baby Records. On the LP, they dig deeply into classic ‘70s American and British music, with their The MC5, Jimi Hendrix, and Iggy Pop roots boldly taking hold.

Pat Beers (vocals, guitar) and Lety Beers (drums) formed The Schizophonics in 2009 and have been on a roll ever since. The made a name for themselves in Europe in 2013 when opening for El Vez and have also opened for The Damned, The Hives, and Cage The Elephant.

People in the Sky is the band’s second album and follows up two singles, an EP, and debut album Land of the Living, which came out in mid-2017 via Sympathy For The Record Industry. The new LP was recorded by Pierre De Reeder (Rilo Kiley) and mixed by Stephen Kaye (JD McPherson, Mike Krol).

Rebel Noise is stoked to host the premiere of “The One I Want”, a wildly rousing and retro-rock track from People in the Sky. A strutting drum pace is stirred up with a sharply gritty guitar line and rough and passionate vocal exclamations. The fuzzed-up guitar goes for broke during a midway break, while the vocals punch through to the end with fierce determination.

The Schizophonics are also kickin’ out the jams live, so catch them on tour now through mid-November.

Pre-order People in the Sky: http://www.pigbabyrecords.com/store.html

Album Premiere: Stuck Together by Mutts