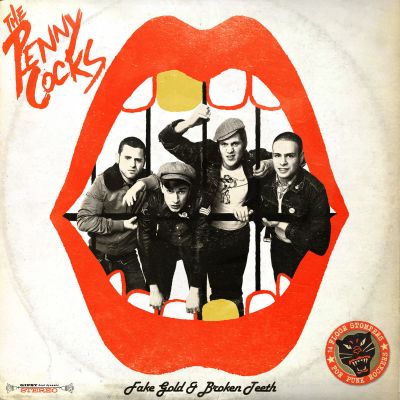 The latest album from Barcelona, Spain-based Penny Cocks, Fake Gold And Broken Teeth, out on BCore Disc, is a collection of punk classics from before and after the ’77 punk explosion. It hides cover versions like ‘Bottle of Wine’ (by blasphemers The Fireballs, possessed by the same devil as “Great Balls of Fire” or “Drinkin’ wine, spo-dee-o-dee”), ‘Jibba Jab’ by Tic & Toc and ‘So Excited’ by The Equals”.

You wouldn’t know which are the classics and which are the inventions from their own quarry. There’s ‘Do You Wanna Smoke With Me?’ that drinks from Dead Boys and ‘C’Mon Gipsy’ (that could have perfectly been released by Chiswick Records); ‘We’ve Nothing To Say’ is Radio Birdman School, ‘Shake Ya’ The Hives and then suddenly, ‘You’ve Got Me Baby’, a romantic pop twist with an The Undertones aroma.

The band members say they look for “The Jam in melody, Cockney Rejects in roughness and Stiff Little Fingers in sound” but, even if they try to sound old-school, they cannot help having that speedy sound so characteristic of our modern times, and in their rich blend of influences you’ll find postmodern eclecticism.

Penny Cocks in a nutshell: the band combines the devil and punk rock, adding an exuberant refinement in its lyrics, where, apart for the usual wildness, you can find work class conscience and the intransigent need for opportunity; even if the plea in “I Need a Job” makes you want to run away instead of finding work.