Springsteen Performs With Mike Ness and Tom Morello in Anaheim 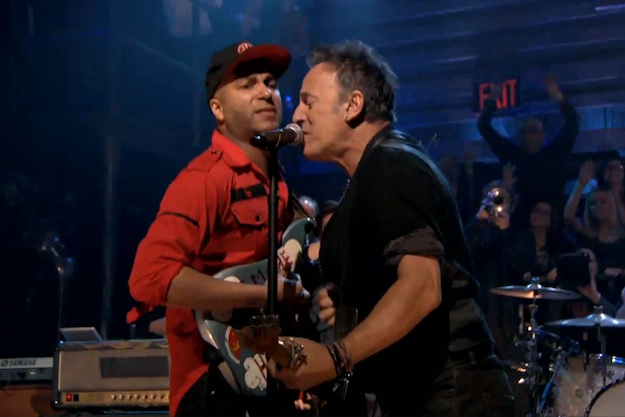 This pic is from a performance back in March on Jimmy Fallon.

Rage Against the Machine’s Tom Morello and Social Distortion’s Mike Ness joined Bruce Springsteen and the E Street Band onstage during their concert at the Honda Center in Anaheim, CA last night. Morello and Ness took the stage in the middle of the set for a rendition of Social Distortion’s “Bad Luck.” Morello also sat in on the show’s opening song “Land of Hope and Dreams,” as well as “Death to My Hometown,” “Long Time Coming,” The Depression,” “The Ghost of Tom Joad,” “Badlands” and a show closing “Tenth Avenue Freeze-out.”

It wasn’t the first time that the two collaborated with Springsteen. Both Morello and Ness joined The Boss onstage during his two night run at the Los Angeles Sports Arena in 2009, with Morello joining him on April 15 and Ness sitting in on April 16. Springsteen also sang and played guitar on Ness’ song “Misery Loves Company” from his 1999 solo album Cheating at Solitaire. A video of Springsteen playing Bad Luck with Ness at his April 16, 2009 show can be viewed above.

As previously reported, Springsteen will be in New York City on December 12 for the 12.12.12 Concert for Sandy Relief at Madison Square Garden. He will be joined by a stellar group of musicians including, Paul McCartney, The Who, Roger Waters and more. Springsteen will also embark on an extensive European tour in the spring of 2013.