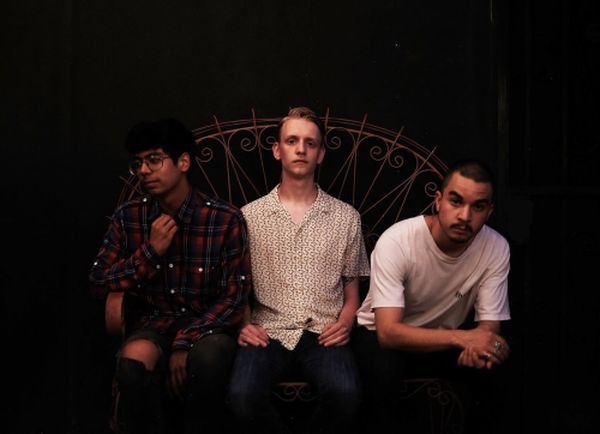 Texas-based indie rock trio Sleepspent released their debut EP, It’s Better If You Don’t Speak Or Think, in May last year via Slow Start Records. It was produced by Chris Common (Le Butcherettes, Minus The Bear, Chelsea Wolfe) and showcased the band’s ability to blend the dynamic and dreamy aspects of rock music into a transporting and melodic whole.

Stand-alone single “California” made its way out this past November and now Sleepspent are bowing its accompanying video on the day of their first February tour date.

California-based Rebel Noise is psyched to host the premiere of “California”, a restless and bittersweet track that wavers between a hazy airiness and gritty propulsion.

The same can be said of band El Paso native, founder, singer-songwriter, and guitarist Austin North’s vocals that radiate a heathered regret on the verses and then push out passionately on the chorus sections. North, his emotions (and guitar) in turmoil, is joined by Grant Gonzalez on a deep undercurrent of bass and Josh Mendoza on kinetic drum strikes and cymbals smash.

The video for “California” focuses on North driving his car through nocturnal city streets (coolly filmed from his point of view), picking up victuals at the local Food Mart, pumping a tankful of gas, and bemoaning the fact that, “I’m alone now”, crooning ruefully, “I’m out of gas / …out of time.”

But as his angst plays out, the skies begin to brighten with the dawn alighting on a more natural landscape of low mountains, dull scrub, and sandy soil. North gets out of his vehicle and heads up a hill marked by wood pylons. Because of the psychologically roiling lyrics, the question hangs in the air of what will happen next…

North explains that the video for “California” addresses mental health struggles, specifically “feelings of isolation and loneliness.” He reveals that the song ““California” came from a place of desperation, from an overwhelming feeling of being trapped, and from a desire for a cathartic release in the form of vulnerability and openness.”

As for the video, North states, “The video really captures and mirrors the experiences that I’ve had that led to the creation of the song - I think it’s integral in understanding and connecting with the music itself.”

Sleepspent recently came off a November tour, but head back out right now, with a video release show and February tour kick-off tonight (February 1st) at Neon Rose in El Paso, Texas at 9pm. The band is joined by The Other Half, Great Shapes, and JJ Caballero.

Song Premiere: “Acquainted With The Night” by Unknown Instructors