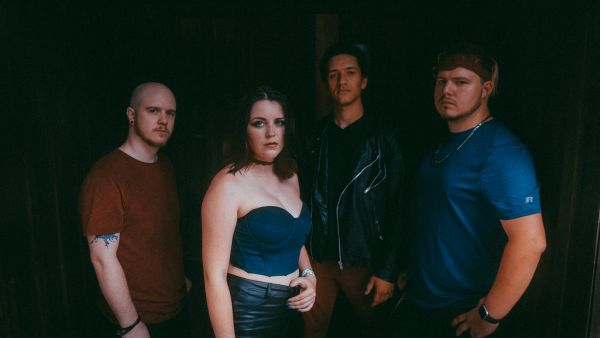 Hailing from Atlanta, Georgia, dynamic and catchy alternative rock/metalcore band Misty Eyed are known for the potent vocals of frontwoman Megan Burke, their energetic live shows, and their modern spin on 2000’s alt-rock.

Their inspirations run the gamut from Metallica to Five Finger Death Punch and Evanescence. Debut EP Eurydice announced Misty Eyed to the world, and since then they’ve supported acts like Hollywood Undead and DIAMANTE.

Misty Eyed have signed to 59 X Records and their upcoming Samsara EP is slated to arrive on October 29th.

Rebel Noise is stoked to host the premiere of the enjoyably rambunctious music video for the anthemic lead track “It’s Goin’ Down” ahead of the EP’s drop.

True to the party nature of the sing-along song, mid-way through listeners can hear the crack of the tab of a beer can. The storytelling video directed by Chase Warren follows suit, focusing on a group of costumed friends who've gotten together to play a sedate board game in the living room.

But soon the band members crash this so-called party and take it to the next level, with spirited hijinx ensuing (including some performance footage of the song).

The friends finally let loose and enjoy the wacky company of the band, to the point where they’re zoned out on the couch by the early morning and the band sneak out of the house unscathed.

When Both Parties Act a Fool We Lose