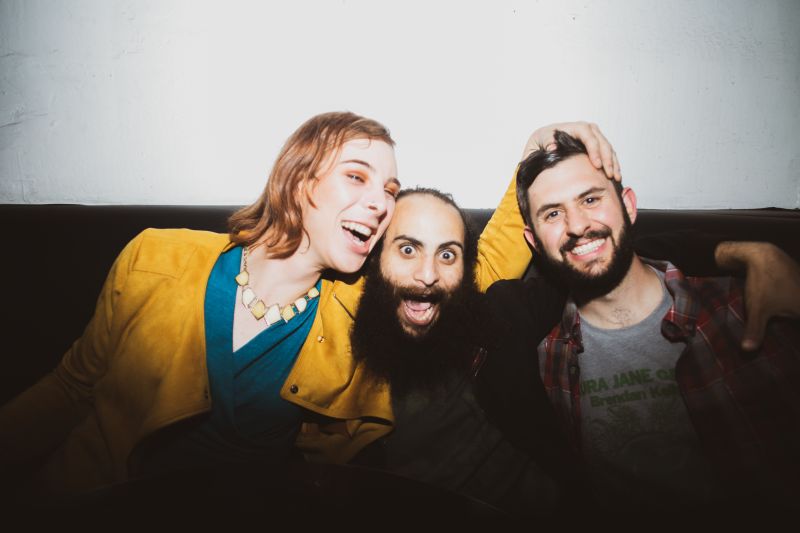 Hailing from the high-rent city of San Francisco, yet sounding like gritty downtown urbanites, the members of Goof don’t put up with any crap. They’re not adverse to expressing their opinions in song, which can be heard on their upcoming uncompromising (and Metallica-inspired) debut album, Kill ‘Em All, which unleashes on September 24th.

Goof formed in 2019 and is led by songwriter and guitarist Ahmed Amer Elsayed. He’s joined by his friend Taylor Martin on drums and Ryan Bahm on bass. Elsayed may tackle serious subjects on the songs, but the grimy, dynamic, and catchy tracks are for pure sonic enjoyment.

Kill ‘Em All was engineered, mixed, and mastered by Jack Shirley (Deafheaven, Loma Prieta, Gouge Away) at The Atomic Garden in Oakland.

Rebel Noise is stoked to host the premiere of the lyric video for the scathing track “Moron.” Elsayed doesn’t pull any punches on the number, exclaiming with defiance, “You’re a moron / posing as a friend” amid the onslaught of jagged guitar grind, low-end bass line, and pushy drum pummel.

The music video itself is composed of hand-scrawled lyrics that sprawl across the screen, as well as some illustrations of the ‘moronic’ (and destructive) behavior of people warring against and shooting each other.

Elsayed comments on the origins of the song’s lyrics, explaining, “I wrote [“Moron”] about the many misguided celebrities that have very problematic beliefs and views. That is their right, but it’s also my right to call them morons. Those problematic views and beliefs cause a lot of pain for others, especially when they come from someone who wields so much influence.”

Elsayed kindly took some time to reply to a few interview questions, digging more into the meaning of “Moron,” and giving details about the upcoming album and plans being made during the ongoing pandemic.

Your upcoming album that “Moron” is a single off of plays a bit into societal and political issues, but is maybe tongue-in-cheek. How does “Moron” specifically fit into those themes?

“We live in a world of tolerance and not acceptance, but I don’t. I accept that there is a lot of negativity in the world and instead of just tolerating it and saying “to each their own,” I fight back and call out people that support those views and show everyone they’re morons. Especially those people who are celebrities, [who] have a lot of influence. They have the right to free speech and to believe in whatever they want, but so do I.”

“I choose in this song to call out a celebrity that supports the Mormon “faith,” a beloved songwriter who is a far-right sympathizer with Nazi tendencies, a rapper with a God Complex, and the golden child of Scientology.”

“All those things cause a lot of pain in a world that is already confusing, and it’s time for bad ideas to die, hence the album title, Kill ‘Em All. We almost left this song off the album but Ryan, our bassist, suggested keeping it right before entering the studio. Now I wouldn’t have it any other way!”

There are a couple lyrics that especially stand out. Who are Smith Boy, West, and Tommy? Also what does that odd line about “special underwear” mean?

““With a flower in your name” is a reference to Brandon Flowers, lead singer of The Killers who is a supporter and advocate of the Mormon religion. He and Richard Dawkins had a debate where Brandon tried to defend Joseph Smith claiming he wasn’t a con-man, telling Richard he should “do his research.” So he is moron number one. This is also where the line “special underwear / I can’t explain” comes from. Apparently The Church of Jesus Christ of Latter-day Saints sells underwear which they call The Temple Garment, which supposedly protects you from sexual temptation and the devil - haha!”

““Smithy boy” is a reference to Morrissey from The Smiths who is a far-right and therefore a Nazi sympathizer. I don’t know if it’s just me, but the two seem to go hand in hand. Plus I hate The Smiths.”

“West and Tommy” are Kanye West and Tom Cruise. I’m pretty sure I don’t have to explain to anyone why these two are morons, which is a shame ‘cause I really love their art, but they’re insane.”

“In the case of Kanye, I wish he would seek the professional help he clearly needs. We can all use help sometimes, even the biggest artist in the world. He could do that and be a positive example by showing people that seeking help isn’t a bad thing. On that related note, Tom Cruise is irresponsible and notoriously railed against psychiatry and antidepressants on The Today Show.”

““West and Tommy” is meant to sound like a law firm because I thought it sounded funny and wanted to give myself a laugh.”

It’s a bold move naming your upcoming album Kill Em All after a Metallica record. Is this because of the direct San Francisco ties?

“I picked it ‘cause I love Metallica! I listen to Master of Puppets every day to inspire myself to stay off drugs and away from stupid behavior. It’s definitely a nod to them being from the San Francisco Bay Area music scene, but for me personally “Kill ‘Em All” means to kill all the negative things about yourself so that you can become the person you always wanted to and should be. Only then can you truly help this world we live in, and, trust me, a lot of people need help right now.”

It’s been a wild year and a half, things are still relatively uncertain… But what plans does Goof have for the rest of 2021 and beyond?

“We have a pretty busy remainder of 2021, assuming the world doesn’t descend into chaos and close back down because a bunch of selfish assholes ruin it for everyone.”

“The rest of our year is relatively scheduled out and booked. Our debut album Kill ‘Em All is releasing on September 24th, and we are still working on trying to put together something special for that. We are doing it all on our own, so there is a bit of learning how to do everything associated with releasing an album.”

“We have Bay Area shows booked at least one a month through December, including some at legendary venues like 924 Gilman and Bottom of the Hill later in the year. Since it took us a little while to get this first album out and we haven’t done much else this past year, we basically have the entire second album written, which we will aim to wrap up and hopefully hit the studio early next year. But for now we are just charging ahead, trying to continue making progress. Always onwards and upwards.”