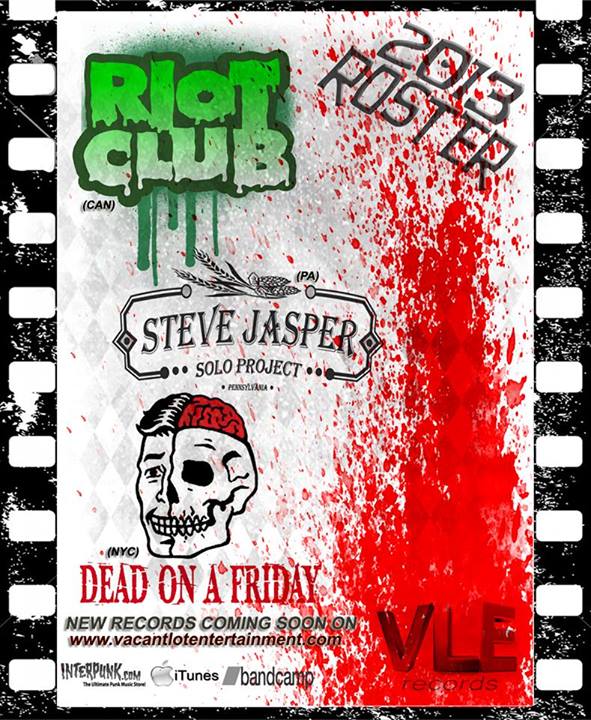 The addition of NYC's Dead On A Friday, Toronto's Riot Club, and solo artist Steve Jasper from Pittsburgh, PA is sure to build steam for VLE's freshmen roster in 2013.

Dead On A Friday's presence in the New York post-90's melodic punk scene has been established since 2003, however the announcement of a new full length record in early 2014 had caught the attention of label owner, Gregg White, who quickly seized the opportunity to produce the record and sign the band to a two-album record deal. "I knew the
members of the band for some time now," says White, "and I've always felt that they had a sound that embraced the old Punk-O-Rama compilation era which we grew up on. Like most bands from the early 2000's, they just needed the right opportunity to get the music out farther, and I'm glad we can be a part of their success." VLE Records will be re-releasing the band’s first album “Hope I Was Worth It”, as well as two future full length records in 2014.

Canadian street punks Riot Club have also been added to the VLE Records lineup. This 4-piece embodies the early 90's ska/skate
movement, which has been grandfathered over from bands like Guttermouth and NOFX. The band had self-released a 6 song EP which found its way into the hands of VLE music director, Jaycee Lights, and quickly put the band on the label's radar. Also scheduled for two new full-length records to drop next year, many of the songs from the original EP will be re-released on the first collection under the VLE name.

Steve Jasper, former front man from Pittsburgh based band, Short Long, has also signed with VLE Records to release an EP this winter for his solo project. Jasper has been consistently producing music for a variety of other bands via his "Studio 2F" recording facility. "After touring through Pittsburgh, and meeting Steve and the guys from Short Long, I've always known I wanted to hear more from them," says White, This is a highly anticipated record for me, so we're all pretty excited about it."

These three bands join punk veterans Flat Broke from Detroit, MI as new VLE Records label-mates, and you can certainly expect to see a series of cross-promotion and label showcases featuring one or more artists from Vacant Lot in the near future.