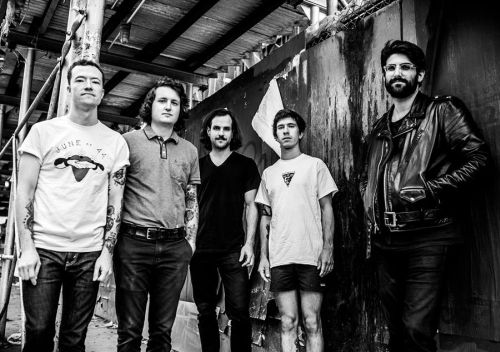 A curated rundown of the latest news on rock, punk, hardcore, and similar music genres.

Los Angeles-located post-hardcore band Touché Amoré return with a new single, “Deflector”, three years after the release of their raved about fourth album, Stage Four. Filled with quicksilver time changes and a more mellow flow, yet still amped with vocal and lyrical intensity, “Deflector” shows a bit of a different direction for the band.

Official news: As singer Jeremy Blom states, ““This time around, we need to take a chance with the unfamiliar. Someone who would take us out of our comfort zone. Enter Ross Robinson. A man who knows no comfort zone… When we returned from our recent Midwest tour, we entered the studio to record a song with Ross and see if there was chemistry…” That chemistry was captured with Robinson’s (Korn, At the Drive-In, Glassjaw) signature analog recording style and [the song] was born in a small basement studio in Atwater Village, CA.”

Raw and aggressive hardcore band Hesitation Wounds has dropped a new track that attacks with relentless intensity. “At Our Best When We’re Asleep” gets deep into socio-politically relevant lyrics, but blasts everything to bits with their pulverizing sound. Their latest album, Chicanery, was unleashed on August 30th via Deathwish, Inc.

NYC-based hardcore band Car Bomb has unleashed their third single, the incendiary “HeLa”, off their upcoming album Mordial, which drops like a… umm, sonic explosive device on September 27th as a self-release in the U.S. and via Holy Roar in Europe.

Official news: “Mordial is the fourth album by Car Bomb. [It was] recorded at Silver Cord Studio (Gojira) and mixed by Nolly Getgood (Periphery, Animals As Leaders). [The band] has made its name over the past two decades as master craftsmen of metal that is as heavy as it is progressive. Guitarist Greg Kubacki states, "With this particular record it really feels like the gloves came off, and that we were free to experiment with whatever we wanted to.””

Young punk rock band Grade 2 hail from the Isle of Wright and will drop their latest album, Graveyard Island, via Hellcat on October 11th. The band released a rousing video for their defiant shout-along “Graveyard Island”.

Official news: “The album was recorded and produced by Rancid’s Tim Armstrong at Armstrong’s Shiprec Studios and mixed by The Interrupters’ Kevin Bivona. Formed in 2013, the band met at school where they would spend their lunch break playing covers of classic punk tunes together in the music room. Since their formation, the band has released several EPs and two studio albums: Mainstream View (2016) and Break The Routine (2017).”

U.K. dream-rock/noise rock band Burning House release a video for their fiery and careening single “Her Vowel No.” The track comes off of the outfit’s debut album Anthropocene, which came out in July via Miohmi Records.

Tom Keifer and his Keifer Band let it all out on new album Rise, which arrived on September 13th via Cleopatra Records. Keifer was the frontman of metal/blues pioneers Cinderella, whose famous balled “Don’t Know What You Got (Till It’s Gone)” belies the fact that Keifer at heart is a heavy rock ‘n’ blues musician and not a hair metal titan (well, maybe at the time, in the eyes of the public).