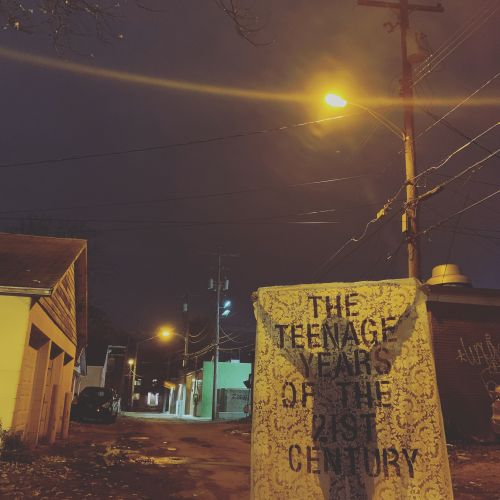 Micah Schnabel, the frontman of Two Cow Garage, just dropped his new solo album The Teenage Years Of The 21st Century on December 3rd and has lined up a run of tour dates supporting Frank Turner this coming March. Schnabel has been releasing his own material for a decade, with 4 full-lengths and 2 EPS to his name. He also unveiled his first novel, Hello My Name Is Henry, last year via White Gorilla Press.

Official news: “"[This record] is my attempt at chronicling the anger, fear, and disillusionment of our current times," Schnabel explains… "Writing this record was my way of coping with a world that feels like it’s descending into madness… I hope others find a connection and feel a little less alone. If only for a moment."

Berlin-based (by way of NYC and LA) Goth/industrial outfit Bestial Mouths unveil a foreboding and atmospheric video for their equally ominous and striking song “Withiin.” The song is off their latest INSHROUDSS EP and the video was directed by directed by Jae Mathews of Boy Harsher.

Official news: “Since their inception in 2009… Bestial Mouths have been creating some of the most powerful darkwave-drenched post-punk in the musical underground. With fearless banshee vocals from Lynette Cerezo, whose vocals range from operatic, extended-technique furies to shouted monologues, the band are a medium for pure emotion. Adding to the sonic chaos are band members Brant Showers and Balázs Képli whos soul-searing synths and tribal percussion respectively invoking the darkest depths of the human condition.”

Hardcore band American Nightmare will be kicking off the 20th Anniversary Tour in February of next year. Their new Life Support EP is out now digitally via Heartworm Press and will be released on vinyl via Deathwish Inc. in the New Year. This record follows up 2018’s self-titled album and features an original track backed by a cover of a Lemonheads song.

Official news: “The A-side contains the title track, and confidently expands upon the jangly proto-punk leanings hinted at on previous releases while retaining American Nightmare’s trademark angst. Having covered The MC5, Black Flag and the Germs this should come as no surprise - the B-side features a fantastic rendition of the classic “Left For Dead” originally recorded by Boston’s The Lemonheads.”

“Catch American Nightmare on the road in support of the Life Support EP, as well as the 20th Anniversary re-issue of their seminal debut album, Year One, this February.”

New electronic rock/hip-hop act ICON the GREAT has debuted their first song, “Back For More”, and its vivid accompanying video. Filled with deep beats, twisty electronics, and aggressive to melodic vocals, the duo of Big Wave and Tripper have developed a hybrid style that melds elements from the rock, rap, electro, and pop realms.

Official news: “ICON the GREAT is here to prove that genres and expectations are a thing of the past. “The best part about music in today’s climate is the line between genres is dissolving quicker than ever. Fuck what you listened to in the past. ICON the GREAT is here for everyone to let their demons out no matter where you’re from.””

Italian noise/garage rock ‘n’ roll band SLOKS have recently released their debut album, Holy Motor, via Voodoo Rhythm Records. They describe themselves as a “female-fronted raw power No Wave garage/trash [rock] combo” who “distract every brain and crush every mind in no time.”

LA-based indie rock band Broken Baby features careening guitars, propulsive drumming, and defiantly sneering vocals. Their new single “My Head’s A Television” is out now and is “a riffy, snarling evisceration of our dependence on technology.” It’s the first single since the release of their debut self-titled album from 2018.

Song Premiere: “Come Down By The Water” and “Just A Little While” by Heavy Hinges