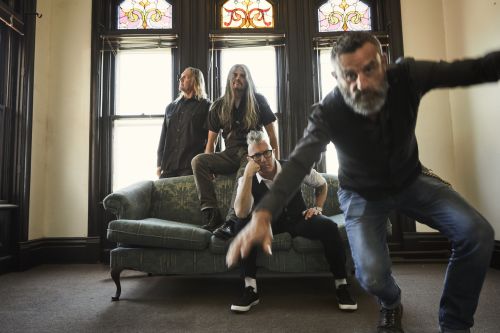 A curated rundown of the latest news on rock, punk, hardcore, and similar music.

Heavy rock band TOOL unearthed their highly anticipated new album, Fear Inoculum, on August 30th via RCA Records. It’s the fifth studio album from the group and follows the re-release of their prior albums: Opiate, Undertow, Ænima, Lateralus, and 10,000 Days, available for the first time on digital service providers.

Official news: “The 85-minute collection was produced by TOOL, with Joe Barresi engineering and mixing the release. Barresi also worked with the band on 10,000 Days. Pre-orders for both the special package and digital downloads are available now at: http://smarturl.it/TOOLFIa”

U.K. rock band The Darkness spread some light with a cheeky (literally!) video for “Rock and Roll Deserves to Die”, a hybrid track (orchestral, rock) off their upcoming album Easter is Cancelled. The LP arrives October 4th via Cooking Vinyl.

Official news: “Opening track “Rock and Roll Deserves to Die”… sees the band hailing the death of the guitar in an epic five-minute masterpiece featuring monumental riffs, thunderous bass and almighty drums, alongside some beautifully delicate touches from the band.

The songs are a glorious example of what to expect from Easter Is Cancelled, the band’s most exciting and diverse record to date. The ten-track album produced by Dan Hawkins examines the role of the musician in the barbarous culture of the world today, and their almost divine responsibility to challenge the establishment – something that most rock ’n roll artists seem to have given up on in favor of easy celebrity.”

Oakland-based heavy rock/metal band Stimuli have released a music video for “Ripple”, a weighty, but also expansive track from last year’s album They Are We. Part performance and part design-oriented, the video, and song, showcase the psych-rock facet of Stimuli.

Official news: The band explain the meaning of “Ripple”, divulging, “[It’s] a song about finding peace and fulfillment in a moment or series thereof as we race through life. The song was originally titled “Ripple In Perception” about an alternative way to experience and appreciate time.”

TSeattle-based (by way of Ohio) folk-punk singer-songwriter Aaron Semer serves up no-frills acoustic guitar-and-vocals-driven fare, which may sound too basic, but Semer nails it with his dryly biting vocal delivery and sharply perceptive lyrics about the dark and confusing times we’re living in.

U.K.-based anarcho-punk veterans Subhumans will release their new album Crisis Point on September 13th via Pirates Press Records. The raging first single off the LP, “Thought Is Free” is out now and the band have kicked off a fall tour that will run through November.

Official news: “Subhumans are one of the most influential bands from the U.K, anarcho-punk scene of the ‘80s, filed right alongside Crass and Conflict, and just as relevant today as they were during the darkest days of Thatcher's Britain. The band epitomizes non-conformity and connects with people in many different scenes. This is their first new music in 12 years - all brand new songs about terror/pollution/mind control and similar reflections on a world in crisis!”

U.K. alt-rock band Hurtling will launch their vibrant debut album, Future From Here, on October 18th via Onomatopoeia. Comprised of Jen Macro (who’s been a part of My Bloody Valentine’s live band), Jon Clayton, and Simon Kobayashi, the trio are already making waves in the U.K. and beyond.

Official news: “Future From Here was written by Jen Macro as an “exploration of loss and hope”… Navigating soundscapes from the atmospheric to the psychedelic in this skillfully crafted noise pop album of dreamgaze and blazing textures.”