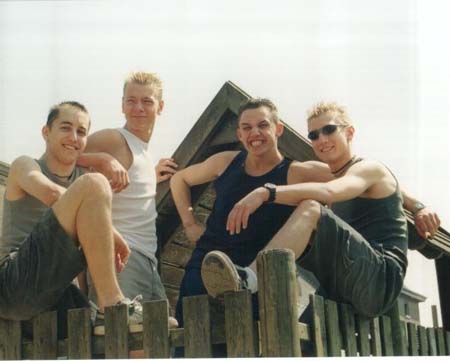 Fist Of Fury is a punkrockband from Zulte (Oost-Vlaanderen/Belgium). The band released a demotape ('Say Hi To Mr. Magoo' â€“ 1999) and a DIY mini-cd ('The Drinks Are On Me' â€“ 2000), since the beginning 4 years ago. One song of the demotape appeared on the 'Best Of Belgium II'-compilation, released by Green Leaf Records and Open Door Records. On July 19th 2001, the next Fist Of Fury-recordings were released by Full Contact Records. This time, 4 songs of the band appeared on a split-cd, together with new recordings from THL (B), The Divisive (Finland) and Go Ape (The Netherlands). This cd came out to promote a mini-tour with these bands across Belgium and Holland that summer. Fist Of Fury recorded 4 brand new songs for that release.

November 23td, 24th and 30th 2002: Fist Of Fury hits 'DÃ© Studio' in Asse (Belgium) to record 7 new songs and a 7Seconds-cover. While the former songs sounded pritty melodic and poppy, the new songs sound more 'straight-on' and more 'oldschool hardcore/punkrock' than before, but they still contain a lot of melody and above all: tons of energy.

Worth mentioning is that Bruno, frontman of a punk â€˜n rollband from Deinze called The Riot Squad, lend his voice on 'No Holds Barred', which isn't that surprising, knowing that Bruno played the bass in Fist Of Fury for about 3 years, before starting to sing in The Riot Squad.

Fist Of Fury did lots of gigs in the past together with bands as: THL, O.U.T.S.I.D.E., Merauder, Do Or Die, Janez Detd, Convict, Sad Origin, Lost In Da System, SFP, Les Schtroumpfs Alcooliques, 5 Days Off, Skin Of Tears, I Against I, Void Section, Facing Down, Flatcat, The Divisive, Spindrift, A200Club, The Riot Squad and many more.

Good Riddance, 7 Seconds, Pennywise, Sick Of It All, Goldfinger, ...