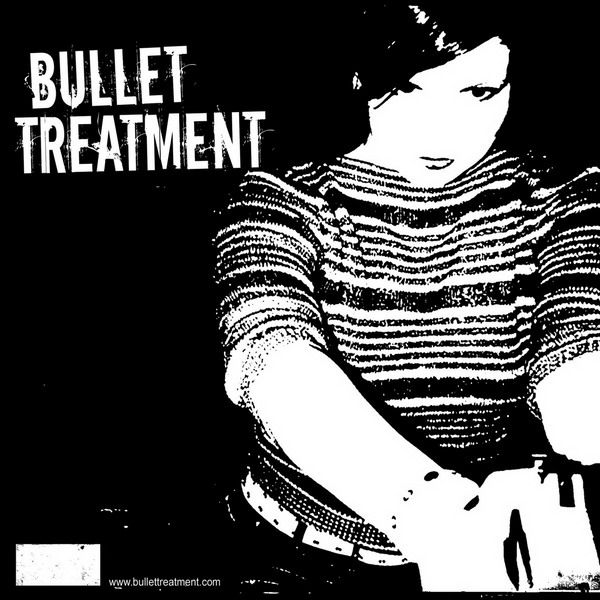 Strange things are a brewing in the desolate wasteland that makes up the OC/LA border cities (a vast array of suburban sprawl running from Whittier all the way south to Long Beach). A scene that is neither OC nor LA, but continues to be it’s own festering ground for true uncompromising punk rock. Leaving behind the melodic pop-punk of many OC bands and showing total disregard to the ultra-chic rock-punk posturing of LA. These cities have bred only the rawest of true punk, who with little press support, has managed to carve itself a niche in the world wide punk community. Among the many true punk bands out in this dangerous territory comes a hellion of a unit known simply as Bullet Treatment. A strange ensemble of an ever-revolving line-up of miscreants who take punk seriously and its honest approach to the genre is both refreshing and exciting. I can’t remember the last time a band actually contained both of these qualities, but Bullet Treatment is the real deal. I cornered these guys in their secret lair and got them to spill the beans on what makes such a volatile band like this tick.

Rebel Noise - What’s with the name Bullet Treatment? I know the secret meaning, but our readers might be in the “not know”.

Dan E. - BT started out as a side project that did covers.  The first covers were “Bullet” and “Gimme Gimme Shock Treatment” hence…Bullet Treatment.

Rebel Noise - Clue us in on the strange and often revolving line-up? I hear there is a lot of mystery on “who is who” in the band.

D.C. – Well there really isn’t any mystery we just don’t go around advertising it necessarily. Of course when we change members consistently it may get a little confusing for some but that’s the whole point. It wouldn’t be as much fun if it was all laid out there for ya.

Dan E. – Usually he comes up w/ a bunch of songs and simply grabs the first available musicians that he can to play them. It’s that simple.

D.C. - Well almost that simple a lot of times nobody wants to play the stuff that I write….hahaha I’ve been trying to get a hold of Jeff (the lead singer/guitar virtuoso from Rock kills Kid) for about two months and he doesn’t want to return my calls. Go figure !

Rebel Noise - You guys have been receiving great reviews, what’s the secret to your positive response? Is there any payola involved and if so, when can I expect my check?

Dan E. -  The secret is…keep it simple, don’t try too hard, and keep it fun. No payola yet…I think…I’m calling Basement and finding out that’s a good question.

D.C. No Shit, where’s my mother f*cking music check ! (Sorry Jay) But seriously we are so stoked with the response we have gotten. It is quite surprising if you really know the whole story with what goes on. And it is really awesome when someone that has been an influence on me like Greg Hetson tells you that he really likes the record and hopes it wakes some people up. How frickin’ cool is that !

Rebel Noise - You guys did a split full length with “riotgun.”, the Motorhead/Ramones tribute (Strength to Endure). I heard there is some strange tale that goes along with that one. Can you share some of your experiences with that one?

D.C. – It was a blast, Dan E. didn’t play on that though. That featured Daredevil Dave on drums, and it was the first time Anthony (the singer for that record) ever sang before which was great. We basically set up a bar-b-q out back of the studio got started at about noon starting drinking and flipping burgers and we recorded 17 Ramones songs that day for the split…boom done ! As usual though the more we drank the faster the songs got and in all fairness Anthony had his hands full because we indeed up playing everything about twice as fast as the originals. But it was fun, and that’s all that matters in the end.

Rebel Noise - How did the Basement Records connection get involved with that release and your last two releases as well (“What More do You Want” 10 song epic and the “Furious World” four-way split)?

Dan E. – I’m not entirely sure, I had learned some new songs and D.C. came to practice one day and said we were going to be recording some stuff with Basement. I’m not one to ask to many why ?‘s so I just thought “sweet, when do we start recording”. But I guess it was mainly because we had been put on a couple of Radio Disaster Comps by Basement and they received some positive responses, so Basement thought it would be a good idea to start recording some stuff for a release.

Rebel Noise - I heard that the guy who runs Basement is kind of a slave driver, what are your experiences with this guy?

Dan E. - Slave driver…..sometimes.  If your lazy and don’t want to do anything I guess he can be a slave driver.  He’s really straight out and will tell you to get it together.  Recording he doesn’t allow shortcuts.  It’s like you finish a drum and track that sounds good and he will say “that sounds great….do it again!”.  Sometimes I don’t hear a difference when he finally says “that’s rad…next song”. But honestly he AND his wife are really helpful and work their tails off for the bands.

D.C. – Yeah he’s a big prick ! hahaha !!! j/k No, seriously he’s been great to work with and I’ve been working with a lot of people lately and he is just great to be around, a really cool guy. But like Dan E. said he can be a slave driver. When things need to get done….they NEED to get done and there’s no way around it. But that’s good, it’s great when labels do what they actually say they are going to do. We’ve had a few different labels contact us and things always get weird because we’re used to things being this way…but who knows. They told us that we are free to go to another label whenever we want, so we will see what happens.

Rebel Noise - Who are some of the bands main influences?

Dan E. - They range from the Ramones, Bad Religion, 7 Seconds, Minor Threat, Adolescents just to name a few.  I like a lot of newer bands like Rise Against, AFI, Unwritten Law, but our sound is based around these old school ones.

D.C. – I pretty much agree with that, the Ramones are the main reason I’m even sitting here. Dude you forgot about the Angry f*ckin’ Samoans !!!!  C’mon !

Rebel Noise - What brought the band together initially and what has helped this band survive the mucky-muck that plagues the current scene?

D.C. – The reason we “survive” is we do what we want not what someone else wants us to do. If you told me to die my hair because it looks “punk”, I’d shave my head. If you tell me to get tattoos I’ll cut my arms off. Nobody can tell us what we should do…f*ck em ! That’s why we can survive…..Sorry that shit just pisses me off.

Dan E. – Yeah, so many bands are always to be “emo” or “hardcore” and trying to have the “right image” whatever that means.  He just had this noble idea of “how about we just write cool songs and play them”.  What has kept it alive is just we want to just play music and don’t really care about what “the scene” is doing, just friends hanging out and rocking.

Rebel Noise - Is there a “Sloe Jamm the Punk” (obscure LA/OC band) connection here, or is that simply a myth?

Dan E. - Jojo the king of all bass used to throw down the 4 string mastery for Sloe Jamm…but thanks to everything that is Holy the songs don’t sound anything like Sloe Jamm’s.

Rebel Noise - What does the future hold for Bullet Treatment?

D.C. – Well………right now we’ve got a split 7” coming out on Puke n’ Vomit records, we’ve got about a half a dozen comp.s coming out, we are currently in the middle of recording another 12 tunes (as usual, the line-up will change) for a possible new record and we’ve gotten some pretty good offers to tour. The thing that sucks about that is how in the hell can we tour when nobody is ever around at the same time…..but who knows, if anyone can pull it off it’s us.

D.C. – I’d like to thank you for the opportunity to have this conversation. It’s hard to find good journalism nowadays. It’s usually like you have to know someone to get hooked up or something.