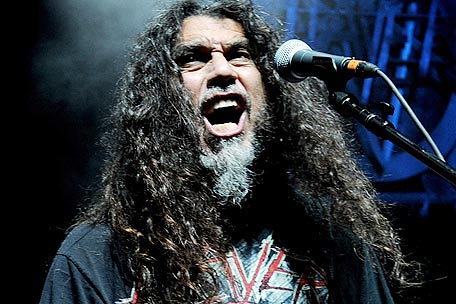 Tom Araya is the king of Slayer. Bassist/vocalist, if you're looking for a more realistic description. His PR person gave me ten minutes on the phone, which was disappointing because I prefer a chit-chat to a straight Q&A, but who am I to complain? Little old me interviewing Slayer? SLAYER??!?!? They're like fucking classical music! She also told me to "stick to the topic," but I was never told what "the topic" was supposed to be, so I doubt I managed that terribly well. Slayer just released a box set called Soundtrack To The Apocalypse with all kinds of album tracks and rarities, so it would be great if all you readers could buy it for me. Thanks! They're also working on their follow-up to God Hates Us All. I'm hoping they'll title it Bob's Happy Rainbow, but my ideas are nearly always rejected (see The Beatles' Let It Be...Naked, which I went to Congress to suggest entitling Let It Be...Wearing A Delightful Vest). My questions are bolded; Tom's answers are plain text. I hope you're enjoying the interview so far, because it's almost over.

Good. What are you up to?

Resting? What, are you in the middle of the tour now?

Yeah, actually we're in Portland. We've got one show here on the tour, and that'll be the end of the tour.

Does that have stuff off every one of your albums?

Yeah, a little bit of everything.

The first two as well? (Note: I knew darn well that the first two albums weren't represented. I intended to go somewhere with this line of questioning, asking him why they weren't included and how he feels about it, but for some reason, I neglected to do so)

No, the first ones, no. We have four songs from that time.

Do you still get the kind of fans who cut Slayer into their wrists and things like that?

Yeah, believe me, it's not a frequent thing, but we've had two people do that. One was compensated for it for the album Divine Intervention, and the other kinda did it on his own. And that was the one time so far that we've seen that happen.

Do you have other, kind of - are most of your fans just normal metal fans?

Yeah. You get your one or two that are fuckin' out there.

Did you have trouble back in the beginning with Christian groups and things like that?

We used to. We used to have picketers and people - we still do; it's just not like it used to be.

Do you believe in the Christian myths? Or is it more -

"In the Christian myths?"

(laughs) I do, yeah. Catholic I was raised. I was born and raised Catholic.

Was there ever any fear on your side?

I certainly became afraid when I first started -

None of that. No fear here.

Are you still writing lyrics or did you stop?

I write. I write, I write, I always write. And if it wasn't used on the album, it's because obviously it wasn't accepted. But I do write. I just don't write musically, but lyrically, yeah I write. Musically, it's their music, so if they choose not to use it, I can't - there's no argument here!

Have you always been happy with the direction they've taken the music?

Yeah. It's always good music, you know what I mean? As long as it's good music, that's what's important. If it were bad songs, yeah, I'd speak up, but they're not bad songs.

What do the new ones sound like to you?

Pretty heavy. Actually, we do have some new material that Kerry and Dave have been working on. And Jeff's got stuff, so - but it's along the lines of Slayer-heavy. Extremely heavy.

Is it sort of more pounding type stuff, like God Hates Us Now? (Note: It's actually called God Hates Us All - I was kinda nervous, and my brain was thinking of the Flaming Lips' song "God Walks Among Us Now." Sorry about that!)

Yeah, yeah. It's along the lines of that. It's a cross-section of what we do, but it's a lot more edgy.

Have you heard St. Anger?

What'd you think of it?

I heard it once. I tried listening to it twice. I couldn't get through a second listen.

Do you still follow any of those other old bands that stuck it out?

No, no. I guess I heard the album wasn't bad. It was better than the last two. It had more riffs. It had some interesting things, but there wasn't one song I liked in its entirety. I liked parts of stuff.

Yeah, and every song was the one part repeated over and over.

Yeah! Yeah, exactly. But yeah, their Load and Reload I didn't like. And The Black Album was alright, but it wasn't, you know. There are just some bands I don't listen to because they just strayed a little too far away from what they were doing.

Do you still like Anthrax at all? Or Megadeth?

Yeah, Anthrax is good. They haven't changed either! Anthrax has pretty much been true to what they do. They just haven't gotten a really good deal. But Anthrax is good. Megadeth had some great records too. Their first few records were good. But you know, there are some bands that are great, some bands that have just kinda fallen along the wayside.

Any newer bands that you're into?

Not really. Hatebreed is about the newest band, because they're really good live. We've done a few tours with them. But there are not many bands that are, in my opinion, that good. Ones that I like, at least!

Are you really only into really heavy music?

Yeah, that's what I figured. Has there ever been any interest in bringing that kind of stuff into Slayer? Or do you feel like you should stick to -

Well, it's very subtle. Very subtle. I try to incorporate melody. Even though I'm screaming, I still like to think I bring melody into screaming.

That's my focus. I try to incorporate some kind of melody into what we do.

Do you write your own bass lines, or do they write those as well?

I basically follow the guitar riffs. So they write `em, unless I come up with something that sounds a lot better than what they're playing. And I usually base what I play around what they play, in either third or fifth or just root notes. So I don't - if there's something I think of that's pretty cool, I'll do that, but like I said, we're basically pretty guitar riff- oriented, so I play close to what the guitars play. And I simplify it depending on the verses or what I'm singing.

On your tour, have you been touring internationally?

No. On this tour, we've basically just done the U.S., but we did do some festival dates earlier this year.

(Note: Here's a question I've asked far too many people. I apologize for my lack of imagination in coming up with interview questions) Have you noticed any more anti- American attitudes because of what Bush is doing? Or. I guess your fans know what you -

Yeah, I don't think people like to involve, you know, when it comes to music, they don't - I think the kids are pretty smart; they separate the two. It's politics. You don't hear or see it from the kids, but you hear it from everybody else.

Are you into politics at all?

What are you really into aside from music?

Reading. And figuring out ways to be creative!

What kind of stuff have you been reading lately?

I read true crime books, and I read when people do case studies of stuff. I'm into books like that. Case studies or forensics or murder - all that good stuff.

Have you seen that one - (to my wife) what's the corpse book you got? (back to Tom) Some book about corpses that just came out.

Is it called "Stiff"?

No, someone told me about it. I checked it out at a bookstore and bought it, but I haven't read it. It sounds pretty interesting.

Yeah, I got it for my wife.

I hear it's pretty crazy.

She was pretty freaked out by it. So do you ever get tired of playing this kind of music? As you get older, is it tougher to play that fast? Or are you just that much stronger?

Nah, it just takes a little more to work up to it, you know what I mean? (laughs)

Cool. With all your sort of nightmare-type music, what do you think would be your biggest nightmare in life? Having to deal with one of the serial killer guys or -

My nightmare is having anything happen to them.

Yeah, I know what you mean. Alright, well, thank you for giving me ten minutes of your time. I very much appreciate it. Anything else you wanna say about the box set?

Anything else about the box set?

I hope everybody likes it!

Heh heh. Got a lot of rare stuff?

And we wrote something at the very end of the booklet in the box that pretty much expresses how we feel. That we owe a lot to our fan base, because it's because of them that we've had this twenty-year existence. So that's about the only thing I really have to say.

Well, you've made a lot of people happy. I've been a huge fan for only ten years, but I know your back catalog by heart. I've listened to that stuff so many times.

Yeah, if there's anything to say, it's just "Thanks." Thanks. Thanks for the twenty years, and hopefully there will be more.

Hopefully there will be twenty more!

Alright, thank you so much.

For more about the author please visit www.MarkPrindle.com.