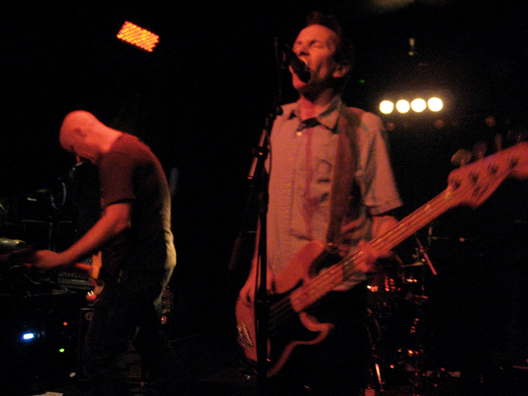 Michael Gerald was the normal skinny clean-shaven guy with the big growling bearded voice who helmed Killdozer, one of the original "grunge" bands back before Nirvana and Pearl Jam changed the meaning of the word. For ten years or so, Wisconsin's Killdozer (Gerald and two men named Hobson) played loud, heavy and slow music with lots of guitar distortion and lyrics inspired by the foibles and problems of the Middle American everyman. Disaster films, `70s classic rock, Walmart, serial killers: all this and MORE! MORE! MORE! Then the Hobsons called it quits with Mr. Gerald not far behind them. However, he was PROUD and HAPPY and NICE to let me conduct an email interview with him. See below for proof that this occurred! (unless I made up all the responses myself, in which case don't tell him). My questions are the bold and his answers are the beautiful.

When you formed Killdozer, did you have that concept from the getgo? The sleazy middle America weirdo thing? Or did you start normal and just get really weird before you recorded the first album?

The Killdozer concept evolved (quickly) over time. For our first couple of shows, in various basements in Madison, WI, we weren't even calling ourselves Killdozer. As for song topics, I firmly believed in writing what I know about, so instead of songs about hobbits or space and astronauts and pool parties, we were inspired by the likes of Ed Gein, who was residing in the State mental hospital just outside Madison; biker gangs that didn't own motorcycles; old people collecting enormous piles of newspapers inside their houses; farming; drunks; bums and bag ladies (aka "homeless people"); and the many wonders of nature. Above all, the songs were meant to make my friends laugh.

How did you decide on that crazy gruff voice?

I did that on just one song when we were rehearsing, and the Brothers Hobson told me I should do it on all of the songs. I complied. Unfortunately for me, any time I attempted to venture away from that "style," I was met with a volley of objections. Even Butch Vig pooh-poohed the idea that I should try my hand at actually singing, which might have something to do with the sound of me actually singing. I cultivated my voice with beer and cigars.

Did you ever feel constricted by the parameters that you'd laid out for the band? Was there ever a wish to branch out in any way that you felt you couldn't without breaking the band's image?

We didn't lay out parameters so much as the parameters were foisted upon us. As I indicated above I sometimes wanted to break free and sing in some other style. Once or twice I actually did! (like on Lee Hazelwood's "Pour Man" on God Hears Pleas of the Innocent or on Space 1999 on Twelve Point Buck -- nothing gruff about that).

Musically, I believe we did branch out, but nobody seemed to recognize the fact -- we were trapped by our image, even as we added a second guitar and wrote and played country songs about Jesus. More importantly, we grew from a band that wore tee shirts and sneakers to a band that wore button-down shirts and polished leather shoes or boots.

Did you get any "pushback" from fans when first one Hobson, then the other, cleared the deck and you kept the band going?

Some people kvetched about it, but what's a guy to do? I know, I should have just started a new band, and in a way I did. I just hung on to the name. If I'd started a band called Panties, things would have been quite different. But still, people would have complained; it's in their nature.

That's a fan's web site. His name is not renaldo larue. He wrote to me, and I wrote back. I never met him and don't know who he is, but apparently he hooked you and me together while he was at it. He has a very nice web site devoted to Killdozer, something I think more people should take up.

Were you ever concerned that people might treat you like a "novelty" act and not notice the cool music you were playing? Especially with all the hilarious cover tunes? You're no "Weird Al" Yankovic! Who wants to be "Weird Al" Yankovic?

I don't think even "Weird Al" Yankovic wants that! I'm not sure I know how people would treat a novelty act. If they came to our shows or bought our records, it never occurred to me to wonder why. Reviews I've read seemed, for the most part, to notice the music and lyrics. Unless they were in the Melody Maker. Those dudes compared us to Black Oak Arkansas and Grand Funk, and meant it as a put down. The reviewer then admitted he'd never heard the music of either one. What baffled me was the assertion by some that we were musical simpletons, even as we wrote songs with changing time signatures and other crap like that. We even played horns in the junior high school band! The most amazing sort of critic was one who praised us adoringly early on, but when Touch & Go left Detroit, where this critic lived, we became his fave example of shit music. I think we took the brunt of his anger over what he perceived as betrayal by T&G for pulling out of Wheel City. He's a music scribe for the Village Voice now, but that's not to say he grew up.

How big did you guys get? What was your most successful period? Was it a drag when the cheering became more sparse afterwards (if it in fact did -- if not, skip this part of the question and make something up about debilitating drug use that you had to overcome. Thanks! - VH1 "Behind the Music" Producers)? Or did you just figure they're a bunch of morons anyway and they deserve their Grifters horseshit?

We made a nice living, and yes things did start to peter out. That's why we finally got out while the getting was good. On our final tour, we kept meeting our old loyal fans who told us such things as they had to get a babysitter to come and see our last show. If they did that all the other times we came to their town, or if alternatively the babysitter came to our shows, we might still be together today. And yes, I always worked on the assumption (or knowledge) that the people who weren't at the Killdozer show were a bunch of morons. Especially if they went to Grifters gigs instead.

What is your connection with Alice Donut? You weren't even on the same label as them! That's not right!

Come on, doesn't everyone and their brother want to hang with the Donut?! I assume you mean it's not right that we weren't on the same label. We had the good fortune to meet them, at the same time they had the good fortune to meet us, at a disco in Berlin. Actually, we double-billed some Berlin music festival, and then went to the disco to show the kinderkrauts a thing or two about dancing. Rather, we showed them how to step on strangers' feet while hopping about with a beer in hand and addressing everybody on the dance floor as Jerry. Did you know that Germans wear BROWN leather pants? How stupid is that?

Why did you finally close up Killdozer shop?

I wanted to pursue other interests.

Have you been playing music at all since the band ended?

I recorded a couple of guest vocals, one for La Pussygata/El Cuerpo Exquisito, and I forgot the rest. That's all.

What do you do for a living? Is it fulfilling? STORIES!!!

I'm a tax lawyer in Los Angeles, and yes it is very fulfilling and rewarding. Knowing that, you can't possibly really want to hear my stories. I can tell you that my three-page personal essay about my fulfilling and rewarding career in Killdozer got me into NYU Law School, that and a nice letter of recommendation from Big Black's rocker turned lawyer Santiago Durango! Now about living in Jersey City and NYC I could tell you some stories, but you didn't ask.

Did you attract any superbizarre fans because of your subject matter?

So many that I started to consider them normal. Particularly in the upper midwest and Pennsylvania, both places where bizarreness is genetic. It became frighteningly clear when we solicited song lyrics for another record that many of our fans were people we would not want to meet. We attracted math professors too, and met them gladly.

Oh, that. I think I expressed my thoughts on a similar topic in the song "Turkey Shoot." I knew only bad things would come when five justices of the supreme court staged a coup, and so far it looks like I'm correct. By the way, I still enjoy FRENCH fries and FRENCH toast and buy FRENCH beer, thank you very fucking much. The beer's nothing special, but it's a good price.

What would you say are the, oh let's say 3-5 songs that you are most proud of? Lyrically, musically - what do you feel were your absolute masterpieces, and why? What really appeals to you about them?

Gates of Heaven
Fifty-Seven
The Nobbies
Sonnet (so good we recorded it twice!)
New Pants & Shirt

I'm not sure why. Horns, a good groove, sleazy beats, I think for the most part the lyrics shine, although I wrote Sonnet originally for a creative writing class (it's a sonnet, get it?) and the professor only gave me a C+. He was a dickhead, and he's dead now.

Did you have a large fan base in Wisconsin? Or did people think you were making fun of them? Did that ever happen?

We did extremely well in Wisconsin, and I would never make fun of anybody. I just expressed scorn.

Did you use to go to Wisconsin Dells alot to see the dogs jump from cliff to cliff?

No, but I have a postcard of it. I had bad parents who never took me to good places like that.

How was the cheese there? Was it as good as they say?

Did you try out for the Green Bay Packers? If not, I need to know why.

No. I hate football.

Did you think that your former producer Butch Vig kinda pussed out with that Garbage crap? You can tell me! I won't tell him!

The dude's making money, and he's a good drummer, so who am I to judge? The man has diverse tastes.

Have there ever been any other good bands from Wisconsin ever? Any hot bands from Ely?

Ely is in Minnesota. I don't know if any hot bands hail from Ely. I think Weird Al comes from Milwaukee. Appliances SFB were a good band from Madison. That might be about it.

For more about the author please visit www.MarkPrindle.com. 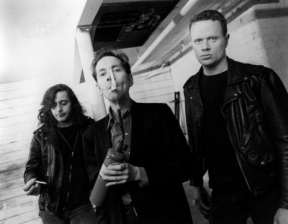 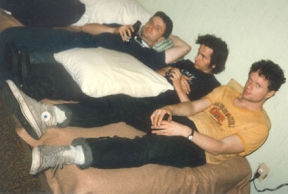 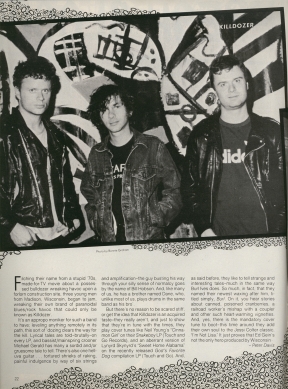 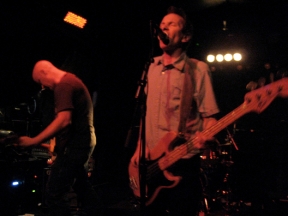