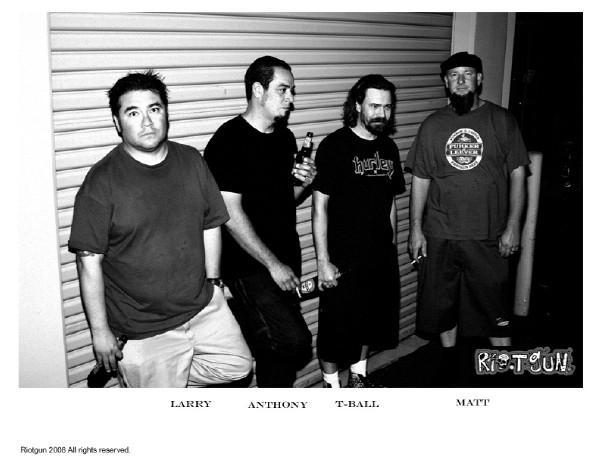 HOW AND WHEN DID RIOTGUN GET STARTED?

Riotgun originally started as a side project to Motorpsycho, I couldn’t deal with a not so honest management and all the BS that was associated with some of the politics involved in the band at the time. So I started something new, something fun, with no pressure, no management and we just started touring. Our first show was in Vegas in 1993 and we have been playing ever since. Unofficially, we started putting it together in 92, but it was more drinking than playing…

WHO ARE THE MEMBERS AND WHAT INSTRUMENTS DO THEY PLAY?

WHO/WHAT INSPIRED YOU TO BE A MUSICIAN?

Beer, Ramones, Motorhead, Husker Du, DOA, Naked Raygun, Cockney Rejects, basically all the punk bands that were not afraid to go against the grain and creat something truly original. We’re also influenced by great movies like Repoman, Vanishing Point, The Big Lebowski, The Wild Bunch and Eat The Rich. The list is endless. But beer plays a huge part in it. By this, I guess I really mean “beer culture”. We are really into strange and original beer, much like our music preferences.

WHAT IS THE BEST NEW BAND YOU’VE HEARD RECENTLY?

I-9, from San Clemente. A great female fronted old school punk band. Tougher than most of these dress up punk hardcore bands around nowadays… simply put, they do an aggressive, yet melodic punk thang that is just honest and fun. Check ‘em out if you get a chance.

HOW DO YOU SELL YOUR MUSIC AND PROMOTE YOUR BAND/SHOWS?  WHAT WORKS AND WHAT ADVICE DO YOU HAVE FOR NEW BANDS ON THIS TOPIC?

We sell through various online sites and distros like Interpunk and Ghetto Rock (in europe), we still do flyers, emails, and Myspace, it sucks that most of the record stores have shut down, but for new bands, I would just say network and try to keep the flyer scene alive. That’s basically the history of punk culture there. The real punk history book…

IF YOU COULD WORK WITH ANYONE IN THE MUSIC BUSINESS (MUSICIAN, PRODUCER, ETC.), WHO WOULD IT BE AND WHY?

I love who I am working with now, but I would consider it an honor to work with Lemmy from Motorhead and/or John Haggerty from Naked Raygun and Pegboy. It would be cool to do something with Iggy Pop, they are all legends who still do what they do and don’t compromise the music for the sake of selling records…

WHAT IS THE MOST MEMORABLE EVENT (ASIDE FROM THE MUSIC) THAT EVER HAPPENED DURING A RIOTGUN SHOW, GOOD OR BAD?

To be honest with you, every show has its moments, silly things happen, some comical some just unnecessary like fights and stuff, but we really just enjoy playing. We’ve done some memorable shows for 20 people at some dive bars and some 4000 capacity shows with bigger bands. Every show has its memorable moments. I like the ones with the endless beer tab… but I seldom remember much from those other than we had a good time. Usually any show out of state is pretty awesome. Too many my friend, too many.

WHICH ONE OF YOU IS MOST LIKELY TO END UP IN PRISON, AND FOR WHAT?

Black Hole in downtown Fullerton. If they don’t have what you need, they know how to get it, legal or maybe not so legal… but they can get it.

WHAT QUESTION HAVE YOU NEVER BEEN ASKED IN AN INTERVIEW BUT ALWAYS WISHED SOMEONE WOULD ASK?

ONE LAST QUESTION I LIKE TO ASK THE SGV VETERANS SINCE WE HAVE A LOT OF SGV LOCALS WHO FREQUENT THIS SITE.  WHO IS YOUR FAVORITE SGV BAND PAST OR PRESENT?

That would be a tie between The Miscarriage Band and The Black Jax, both bands represented the spirit of punk in the late 80’s but they were very different from each other stylistically. I still talk with members of each band to this day, Gary Pogo from The Black Jax just died recently. He was a good, loyal friend and he will be missed. You should try and track down their stuff. Me and Jimmy Spencer (from The Miscarrage Band) are planning something new for 2009 called Broken Patron Saints, hopefully we will have a full length out by spring. So keep your eye’s open.