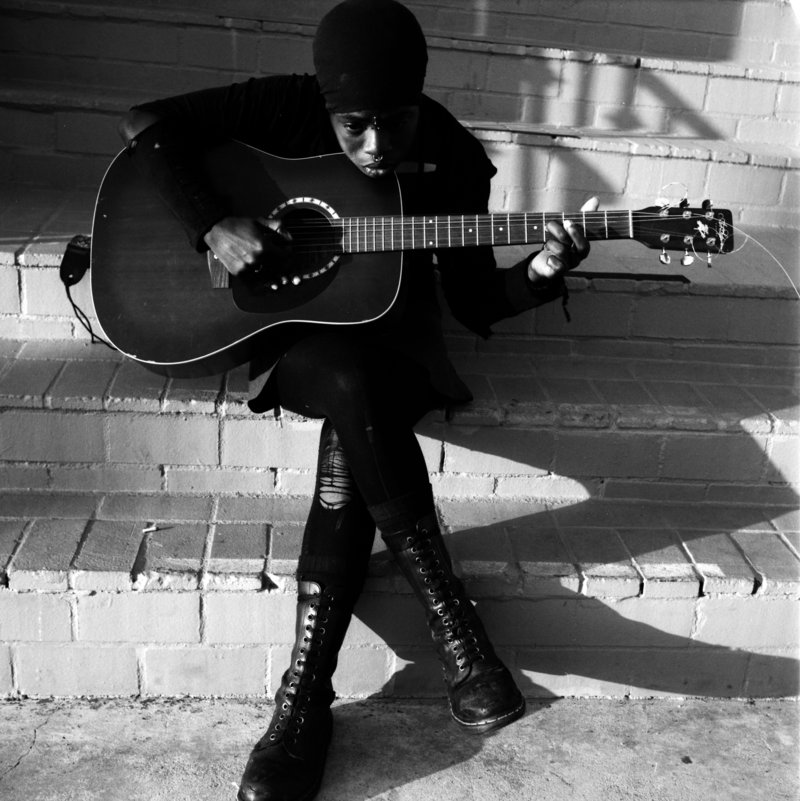 Sunny War, the singer/songwriter who has been honing her own brand of bluesy folk with a punk attitude as a street musician in Venice Beach, has certainly been taking it up another level this last year, what with touring across the country alongside some musical greats (see below) and putting out her first official release, ‘Acoustic Sessions Vol. 1,’ an EP out on iTunes. She’s not exactly sure yet what 2012 will bring – possibly an album and (we think most definitely!) more touring, she relates, “Hopefully there will be something!” She also keeps herself busy with her other project, the folk-punk outfit Anus Kings, who are looking to get back into action, setting up some shows in Chicago and perhaps configuring a summer tour with Little Teeth, a band from Oakland.

I WAS JUST WONDERING, WHEN YOU FIRST STARTED PERFORMING PUBLICLY, WAS THAT WHEN YOU MOVED TO VENICE OR HAD YOU BEEN DOING IT BEFOREHAND?
It started with Monterey, when I got signed to the Monterey booking agency that I really started playing more. Before that I was just a street musician.

WHEN DID YOU SIGN WITH THEM?
Just this year – well, now it’s been a year.

I SAW YOU HAVE THESE SONGS AVAILABLE ON ITUNES NOW.
Yeah, we just put that on iTunes I think a week and a half ago.

BUT YOU'D BEEN PLAYING AROUND THE COUNTRY BEFORE YOU WERE SIGNED WITH [THIS AGENCY]?
I used to hop freight trains. I was a squatter for about six years and I hopped trains and I traveled around.

YEAH, YOU'RE TOTALLY INTO PUNK ROCK AND I GUESS THAT'S KIND OF A PUNK LIFESTYLE! I’VE SEEN YOU'VE DONE A COUPLE OF COVERS BY BANDS LIKE REAGAN YOUTH AND CRASS. HOW DID YOU MIX ALL THIS TOGETHER? BECAUSE YOU DEFINITELY ALSO HAVE THAT BLUESY-FOLKSY SOUND.
I think it has a lot to do with being a street musician. Me and all my friends have traveled and stuff, we all listen to punk, but we’d all travel with acoustic guitars. So even if you’re not really into bluegrass or anything, you kinda start getting into folk music when all you have to play is an acoustic guitar and you don’t really have money to go to shows, so it’s really just the music around you that you’re listening to, and that a lot of the time would be people playing banjos, people playing guitars. If you wanted to hear something and nobody knew how to play it, you’d have to play it. And it would be fun to trade different versions of songs. Like with Crass, I knew the chords, I used to just play it exactly like they did on the acoustic guitar but then I just started thinking it should sound more like folk because it’s acoustic. Then as I got older I really actually started liking blues. Now I just really like roots music but I also still love punk and hardcore.

DO YOU GET SOME PEOPLE WHO AREN'T INTO THE PUNK SIDE OF IT [LIKING YOUR MUSIC]?
I don’t think I even sound anything like punk.

YEAH, BUT I MEAN SOME OF THE LYRICAL THEMES ARE ON THE PUNK SIDE...
Yeah, definitely.

BUT THEN AGAIN SOME PEOPLE DON'T EVEN PAY ATTENTION TO THE LYRICS!
A lot of people have told me – like someone asked me, “What language are you singing in?”

[LAUGHS] REALLY?
Yeah, they didn’t understand what I was saying. A lot of people tell me they don’t know what I’m saying. And it’s pretty mean. But yeah, I’m pretty sure no one listens to the lyrics at all. [Laughs]

I DON'T KNOW; I’VE ALWAYS BEEN A PROPONENT OF THE MUSIC AND THE LYRICS. I THINK BOTH ARE IMPORTANT.
Yeah, the lyrics for me are the most important part of everyone’s music. Well, that’s not true. But a lot of stuff I listen to musically it sucks and I just like it if the words are good.

BUT BACK TO THE SONGS YOU HAVE ON ITUNES, 'THE ACOUSTIC SESSIONS,' WAS THAT ALL RECORDED IN CHICAGO?
No, that was all recorded in L.A.

OH, ‘CAUSE THE SONG YOU HAD OUT BEFORE, "FEEL FREE TO CRY," WASN'T THAT RECORDED IN CHICAGO? OR WAS JUST THE VIDEO I SAW ON YOUTUBE SHOT THERE?
That was recorded in Chicago, but we’re not going to release it because we had an argument with [someone who worked on it]. There’s some kind of misunderstanding going on between us and the people in Chicago. They wanted to have a huge percentage of the publishing or something and it just didn’t really make much sense.

THAT'S THE MUSIC BUSINESS, HUH?!
I’m kinda glad though because I don’t really like those recordings from Chicago.

HAVE YOU DONE ANY TOURING?
We just finished a tour opening for Joe Ely. And there was the Keb Mo 'REFLECTION' tour on the East Coast and a Mindy Smith tour, a Madeleine Peyroux tour. And I think that’s it. I’m playing at The Ark in Ann Arbor for the Ann Arbor Folk festival in January. And also on December 17 there’s Christmas with Bessie Smith and it’s a Christmas show they do every year where people get together and play Bessie Smith songs. There’s also Anus Kings shows coming up.

OH YEAH. SO THAT'S THE MORE PUNK OUTLET...
Yeah, that’s the folk-punk band. You can download all three of our albums for free online, at anuskings.tmbler.com.

OKAY, AND WHAT WERE SOME OF YOU HIGHLIGHTS OF 2011?
I think the highlight of 2011 was the Keb Mo tour, just because I think it was really cool meeting him and talking to him and I got a chance to jam with him. It was just cool to see how a blues musician does things. I learned a lot of stuff from him.

DO YOU SEE YOURSELF PUTTING OUT AN ALBUM?
I’ve been talking with some people from Warner and hopefully I’ll do something with them. But I also want to put something out on my own, like maybe an 'Acoustic Sessions II.' I also have a CD 'Social Suicide' that like only three people have, so I’m gonna try to put that out too.

HOW MANY SONGS WERE ON THAT?
Thirteen. Half of it is good, but then the first half of it we couldn’t really figure out how to place the mic, I guess, and it kinda sounds messed up. But then I’m thinking that that’s sorta interesting.

OH, BUT ALSO, WHEN DID YOU START PLAYING AND WRITING MUSIC?
I started playing guitar when I was seven. My uncle is a bass player and my stepfather was in a band, it was kind of a joke band but it was a real band. But I was always around musicians; my mom has a lot of musician friends. I think my biggest mentor when I first started was this guy called James Nixon, and he was a blues guitarist and he had a class for kids. He’d teach blues standard stuff so I’d take lessons from him. And then there was another guy there that taught harmonica. But he played in the blues bars in Nashville. He just does electric blues and stuff. He was a big influence I think. My mom would take me to go see some of his shows sometimes so that was my first experience seeing live music. And then when I was 13 my family moved to L.A. and I met Brian, the bass player of Anus Kings and that’s when I wrote my first song, “Man Of My House.” We met and we just started Anus Kings and that was my introduction to playing live. We’d play at the Tribal Café in downtown L.A. and at The Smell. Then after that I started drinking and doing drugs and I ran away from home and all this crazy stuff happened, but I think it was supposed to happen. I don’t know what it was. I don’t know if it was like I was a teenager and I was just being dramatic or maybe there really was something going on ‘cause my mom and my stepdad got a divorce. I guess that had a lot to do with it. And then me and my mom were sharing a room together because she didn’t really have a job. There was just a lot of stuff going on. I was just stressed out. I was like, fuck it. I started hanging out with gutter punks at the beach and all I wanted to do was drink every day and get high every day. Then I ended up traveling and doing crazy stuff. I regret a lot of stuff but at the same time I think it’s a big part of my life, who I am. But everything’s better now. I have a year of sobriety.

WOW, CONGRATS.
But I still drink; I just don’t do drugs. 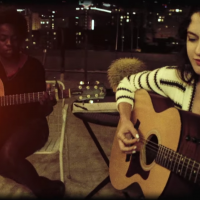 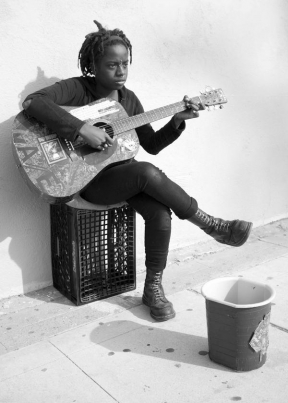 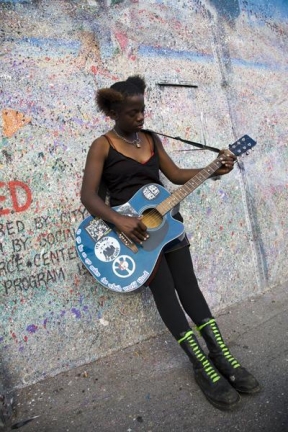 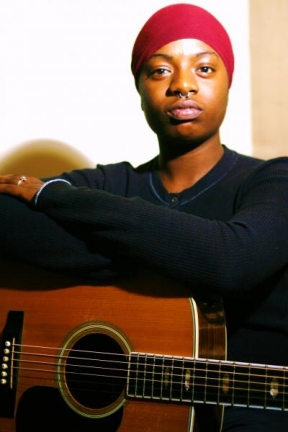 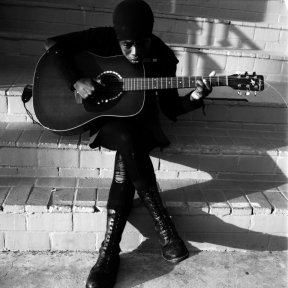